The Harp and Arms of Ireland

Detail from the portrait of Richard III and his family.

The background to the harp becoming the symbol of Ireland in the Royal Arms can only be traced with any degree of certainty from the time of Henry VIII of England. Before this it has been suggested that a harp representing Ireland appears on a late thirteenth century French armorial which purports to blazon the arms of ‘le Roi direlande’ as azure a harp
or, [1] and in the form of a crest in a portrait of Richard III included in a Roll preserved in the College of Arms.[2] It was also believed by some earlier numismatists to have been represented as a triangle on the coins of John, Henry III and Edward but this idea has since been generally discounted.[3] 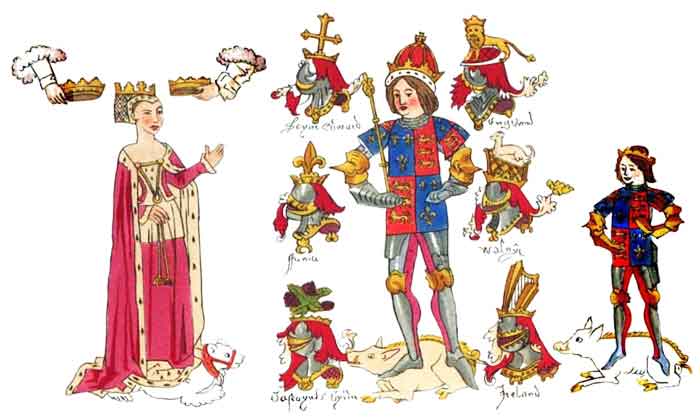 What is far more certain is that, probably from the time of the first Norman engagement in Ireland, the Arms of Ireland consisted of the three crowns, now used as the arms of the province of Munster.[4] Such armorials or heraldic devices date back to the emergence of heraldry in Western Europe during the first half of the twelfth century. It evolved as part of and is associated with the feudal system as practised by the Anglo Normans, most of whom held lands in both England and Ireland and was essentially similar to heraldry in the rest of feudal Europe. Gaelic Ireland on the other hand was not a Feudal society so armorials were mainly an Anglo Norman practice. Therefore the adoption of heraldic devices among the Gaelic aristocracy was a slow and very gradual process. Initially armorials were only used by those Gaelic lords who were most closely connected to the Anglo Normans, only becoming a well established habit by the seventeenth century.[5]

Coins bearing the three crowns had been struck for Ireland by monarchs previous to Henry VIII but when some twenty four years after he had succeeded to the throne he started to issue his first specific Irish coinage, they were a series of groats and half groats which bore on their obverse a shield with the English and French arms and on their reverse a badge of a harp. Why Henry VIII decided to use the symbol of a harp is uncertain but as the ‘harp’ coins seem to have appeared at the time when Henry first became involved in conflict with Rome it is thought that the three crowns were dropped because when reduced to the size of a small coin, they could have been confused with the Papal tiara. 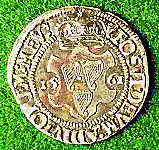 The harp image used for these coins had little in common with a ‘clarsach’ but more closely resembled the type of harp played by Henry VIII in a miniature of him which forms an illustration in his illuminated Psalter made circa 1530—1547.[6] Basically the same style of harp was also used for the Elizabethan issues although in one brief departure from the normal form of one harp on the reverse the coins minted in 1561 had three harps within a proper armorial shield and therefore possibly reflecting the harp replacing the original arms of the three crowns. But that issue was very small and following issues reverted to just a single crowned harp without a shield. 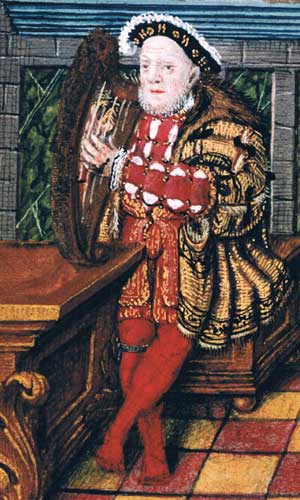 Most of the coinage struck for Ireland was for use in paying the Crown’s bills, from military wages to administration costs. The main reason for having the Irish currency distinguished from the English version was that for most of this period the Irish coinage was heavily debased relative to its English equivalent. At one point circa 1561 the Irish silver shilling was so debased that its low silver content only gave it a value of five and a quarter pence compared to the corresponding twelve pence in the English shilling.[7]

Apart from its use on coins it is during the Elizabethan period that the harp also starts to appear representing Ireland in other applications. On a map of Ireland made by John Goghe in 1567 the legend ‘Hibernia’ is flanked on one side by a cartouche with the red cross of St George on white while the other has an odd looking cartouche like device surmounted by a crown containing within it a harp also surmounted by its own crown. The harp which is clearly based on a recognisable ‘clarsach’ form is neatly drawn with its forepillar on the left and the box on the right, the reverse of the format used on the coinage.[8]

Perhaps the first sign that apart from the coins the harp was being taken up in a quasi official sense to represent Ireland come from one of a number of copies of a portrait of Walter Devereux, 1st Earl of Essex, appointed Captain–General of Ulster in 1573. In the ‘Irish’ version of the portrait the baton held by Essex has a distinct harp on its bottom end.[10] The harp then appears more formally as the badge of Ireland on the Great Seal of England in 1586.[11] It does not though appear on the English coinage until 1603 with the accession of James VI of Scotland to the English throne and his requirement of a new coat of arms representing the new United Kingdoms.

It was the addition of the harp to represent Ireland in these new arms that prompted the remark by the Earl of Northampton who was not in favour of it that ‘the best reason that he could observe for the bearing thereof is that it resembles that country in being such an instrument that it requires more cost to keep it in tune than it is worth’.[12] This statement along with the depiction of both a Harp and the Three Crowns on a fictitious coat of arms made for Queen Elizabeth and printed in 1598 suggest that there was still some uncertainty regarding the Irish arms.[13] This in turn may account for the arms which appear on the Seal of the Customs and Port of Carrickfergus of 1605, which show three harps within a shield and the initial I on one side and R on the other (IR for James Rex) and which appear to be simply three harps substituted for the Three Crowns of old. 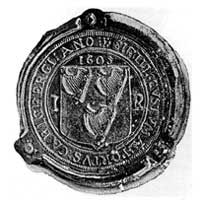 Seal of the Customs and Port of Carrickfergus, 1605.
(Please click on the picture above to view a high-resolution image of this coin.)[14]

The inclusion by James VI and I of a harp quartered within a shield as part of his new United Kingdom arms formally complete the adoption of a harp as the Arms of Ireland. Paradoxically it proved to be the most permanent part of the monarchs armorial since it always occupies the bottom left quadrant of the shield in every version, while in England the other three quarters contain the Lion Rampant for Scotland in one and the lions passant guardant of England in the other two. This is reversed in Scotland where the English lions occupy only one quarter of the shield and the Lyon Rampant of Scotland fills the other two. Other changes to the two versions include both the mottos and supporters.

Initially the harps which feature in the armorials from 1603 while not all exactly the same, do closely resemble the original wire strung clarsach but over the course of the seventeenth century the more stylistic treatment of heraldic devices resulted in the harp becoming more and more implausible as a real instrument. The forepillar in particular develops characteristics more in keeping with a ship’s female figurehead losing all the normal structural features of a real instrument.

[2] Jesse, John Heneage. Memoirs of King Richard the Third and Some of His Comtemporaries: With an Historical Drama on the Battle of Bosworth. London: Richard Bentley, 1862, p. x.

[5] Barry, John, Guide to Records of the Genealogical Office. Dublin, with a Commentary on Heraldry in Ireland and on the History of the Office. Analecta Hibernica, No. 26 (1970), pp 3–43.

[12] Attributed to a contemporary document preserved in the College of Arms in London and quoted in Barry, John, The Arms of Ireland and Munster, Journal of the Royal Society of Antiquaries of Ireland. Vol. 92. No. 1 (1962). 80.

[14] Image source: Vinycomb, John. “The Seals and Armorial Insignia of Corporate and Other Towns in Ulster.” Ulster Journal of Archaeology, Second Series 1.1 (1894): p. 42.