The Harper of Mull

The Evolution of a Myth 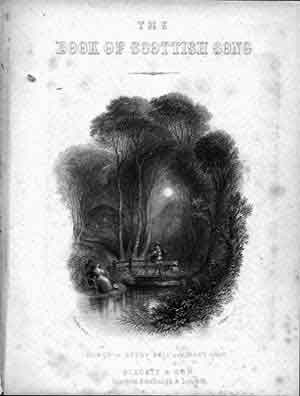 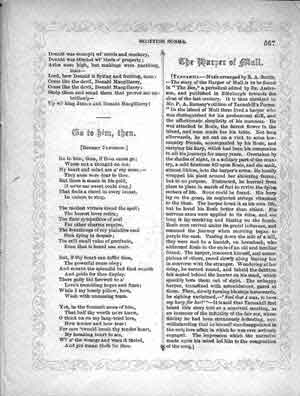 On the left is the Title Page from The Book of Scottish Song by Alex Whitelaw (1855 edition), on the right is the first page of the text concerning the Harper of Mull. (Please click on the images above to see a full–size image of the pages.

Transcript from the Whitelaw book:

—The story of the Harper of Mull is to be found in “the Bee,” a periodical edited by Dr. Anderson, and published in Edinburgh towards the close of the last century. It is thus abridged in Mr. P.A. Ramsay's edition of Tannahill’s Poems. “In the island of Mull there lived a harper who was distinguished for his professional skill, and the affectionate simplicity of his manners. He was attached to Rosie, the fairest flower in the island, and soon made her his bride. Not long afterwards he set out on a visit to some low–country friends, accompanied by his Rosie, and carrying his harp, which had been his companion in all his journeys for many years. Overtaken by the shades of night, in a solitary part of the country, a cold faintness feel upon Rosie, and she sank, almost lifeless, into the harper’s arms. He hastily wrapped his plaid around her shivering frame; but to no purpose. Distracted, he hurried from place to place in search of fuel to revive the dying embers of life. None could be found. His harp lay on the grass, its neglected strings vibrating to the blast. The harper loved it as his own life, but he loved his Rosie better than either. His nervous arms were applied to its sides, and erelong it lay crackling and blazing on the heath. Rosie soon revived under its genial influence, and resumed the journey when morning began to purple the east. Passing down the side of a hill, they were met by a hunter, on horseback, who addressed Rosie in the style of an old and familiar friend. The harper, innocent himself, and unsuspicious of others, paced slowly along leaving her in converse with the stranger. Wondering at her delay, he turned round, and beheld the faithless fair seated behind the hunter on his steed, which speedily bore them out of sight. The unhappy harper, transfixed with astonishment, gazed at them. Then, slowly turning his steps homewards, he sighing exclaimed, — “Fool that I was, to burn my harp for her!” — It is said that Tannahill first heard this story told at a convivial meeting, as an instance of the infidelity of the fair sex, whose fidelity he had been strenuously defending, notwithstanding that he himself was disappointed in the only love affair in which he was ever seriously engaged. The impression which the narrative made upon his mind led him to the composition of the song. 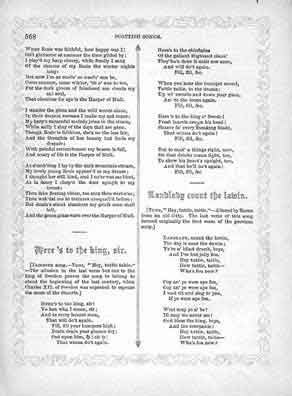 When Rosie was faithful, how happy was I!
Still gladsome as summer the time glided by;
I play’d my harp cheery, while fondly I sang
Of the charms of my Rosie the winter nights lang:
But now I'm as waefu’ as waefu’ can be,
Come simmer, come sinter, ’tis a ane to me,
For the dark gloom of falsehood sae clouds my sad soul,
That cheerless for aye is the Harper of Mull.

I wander the glens and the wild woods alane,
In their deepest recesses I make my sad mane;
My harp’s mournful melody joins in the strain,
While sadly I sing of the days that are gane.
Though Rosie is faithless, she’s no the less fair,
And the thoughts of her beauty but feeds my despair;
With painful remembrance my bosom is full,
And weary of life is the Harper of Mull.

As slumb’ring I lay by the dark mountain stream,
My lovely young Rosie appear’d in my dream;
I thought her still kind, and I ne’er was sae blest,
As in fancy I clasp’d the dear nymph to my breast:
Thoug false fleeting vision, too soon thou wert o'er,
Thou wak’dst me to tortures unequall’d before;
But death’s silent slumbers my griefs soon shall lull,
And the green grass wave over the Harper of Mull.

Robert Tannahill’s three verses on the Harper of Mull, reproduced above from The Book of Scottish Song by Alex Whitelaw, (1855 edition), was one of the latest printings of this poem ranging from single ‘Broadsheets’ to published books. A variation on the theme but with greater artistic licence had also been used by the poet Hector MacNeil for his much longer poem ‘The Harp’ (1789), and in both cases the inspiration was said to be the story ‘The Harper of Mull’ a tale claimed to have been first written or recorded in 1730 and associated with the Harper’s Pass near Lochbuy on the Island of Mull. The story itself was printed in the Edinburgh literary journal The Bee volume 3, (1791) and has also been reproduced in John Gunn's ‘Historical Enquiry Respecting the Performance on the Harp’ (1807), pp 36–45. 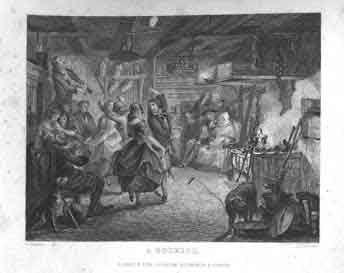 Engraving on the frontispiece of the Whitelaw book.
(Click on the image to view a larger–sized image)

The basic components of the tale are that the minstrel and his lady while on a journey are caught in an exposed position by some severe weather and when the lady starts to succumb to the cold the minstrel uses his harp to make a fire to keep her warm. This was successful but to show her gratitude, having recovered, she promptly goes off with another man leaving the musician to exclaim ‘Fool that I was to burn my Harp for her’ and clearly identifying it with the Gaelic proverb ‘Smeirg a loisgeadh a thiompan ria’. The proverb is to be found in both Ireland, where it is recorded in ‘A Miscellany of Irish Proverbs’ edited by Thomas O’Rahilly, (1922), and Scotland in Alexander Nicolson's ‘Gaelic Proverbs and Familiar Phrases’, (1881).[1] Only in Scotland though is the proverb directly linked to Mull.

So far so good, but we now reach the first problem. The word in the proverb that is being translated as ‘Harp’ is Tiompan and although this was a stringed instrument it was what today would be called a Lyre not a Harp.[2] What are thought to have been parts of lyres have been found in excavations at Dun an Fheuran at Gallanach in Mid Argyle[3] and at Birsay in Orkney[4], in both cases possible wrest-planks, (the part the pins go through at the top of a round topped lyre), made of deer horn. More recently in the ongoing excavations at Uamh an Ard Achadh, (High Pasture Cave), near Kilbride on the Isle of Skye in subsequent years the bridge for a six stringed instrument and a cache of antler tuning pegs were found in deposits dating to circa 450 to 550 BC.[5]

Written references to Tiompan players occur in many Irish sources up to the early years of the seventeenth century, but the instrument along with it’s players who initially had co–existed with the harpers were probably becoming obsolete well before then. In Scotland there are far fewer references to tiompan players possibly indicating that it had fallen out of use somewhat earlier. Even the last recorded player in Scotland, a musician who is listed in the Book of the Dean of Lismore, (circa 1520–35) is an Irishman.

Having established that the instrument involved despite the stories English translations as a ‘harp’ was in fact a form of lyre the next problem arises with the tales supposed locale, the ‘harper’s pass’ on Mull. Here there is at least a degree of consistency as the feature is called Mam an Tiompain according to the Ordnance Survey map makers and forms a flattish saddle in the ridge high up between the higher peaks of Cruach Choireadail and Sgulan Beag on the north side of the road through Glenmore.

The problem is the meaning of the word Tiompan of which a musical instrument is just one. It is also used to describe a drum,[6] a one sided knoll or a narrow gully these last two, both of course geographical features either of which could be what was intended in the place name and they would fit with the topography of the site.

So the story of ‘The Harper of Mull’, apart from having the wrong instrument may also not really have any real connection with the place name, but there is still at least one reliable aspect of the tale and that is the original Gaelic proverb which clearly does involve an instrument and must therefore in origin date back at least to a time before the Tiompan went out of use. Of course the proverb itself with its warning to young males of the fickleness of love is timeless.

[1] The proverb exists in several variations of form and translation, for example Dwelly's Gaelic Dictionary records it as ‘is mairg a losgadh a thiompan dhuit’, translated as ‘pity him who would burn his harp for you’.

[3] Proceedings of the Royal Society of Antiquaries of Scotland, volume 103

[6] Through association with the word’s Latin origin meaning to strike. According to the late Dr Alan Bruford in a personal communication of 8 November 1989 the etymology of the word as given in Cormac’s Glossary is unreliable. ‘Nobody who knows Old Irish sources would take a derivation from Cormac’s Glossary seriously: his etymologies are done for fun, and tend to follow the lucus a non lucendo principle. In this case the P in timpan is enough to show it must be a loan-word in Q–Celtic. There is no doubt that tympanum is the origin’