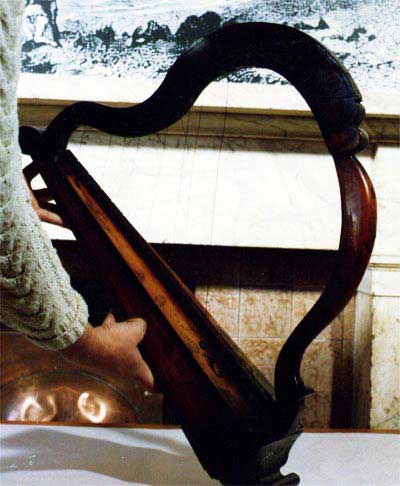 photograph by courtesy of Alasdair Macleod

This harp was made in the Borders at an unknown date for Lady John Scott (Alicia Ann Spottiswoode) (1810–1900).[1] It was later donated to the Museums of Scotland in 1931 at which time it was said to have hung in the hall at Spottiswoode for 50 years.[2] The Museum currently has it in storage. 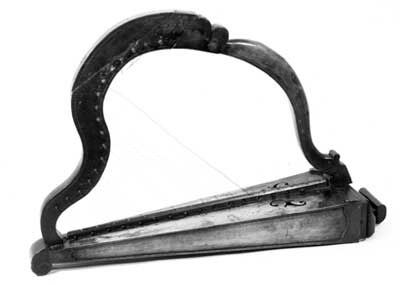 This is a small wire–strung harp with 17 strings, eleven of which are steel wire and six are wound wire. It was possibly made by a local joiner, Mr. Thomas Gill, with a soundbox of softwood and spruce board, a pillar of what might possibly be laburnum, and laquered and gilded arm of oak with handmade iron tuning pins. Curious features include being centre–strung through holes in the underside of the arm, similar to the method used in current Paraguayan harps, and a bulky stringband incorporating internal transverse wooden pegs to which the strings are fastened. It was probably made as a romantic artefact: an engraving of the Thomas Duncan (1807–1845) painting “Prince Charles Edward, asleep in one of his hiding places...” includes a very close counterpart of this harp, such that the conclusion may be drawn that one was a copy of the other, but which came first is unknown. 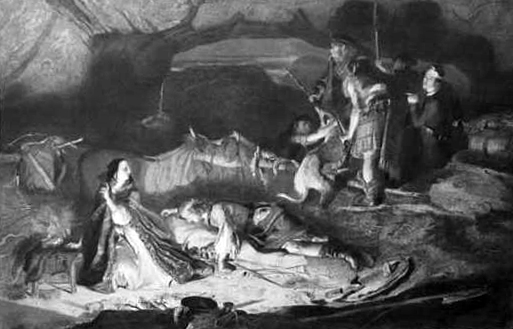 The engraving by Thomas Duncan (mentioned above). The image of the harp is seen on the left side of the engraving. 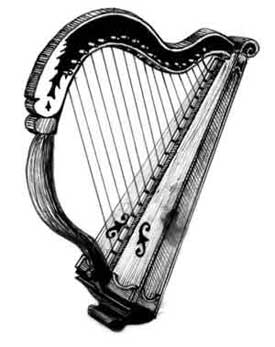 A drawing of the Lady John Scott Harp by
Alasdair Macleod.

A replica of this harp was made by Alasdair Macleod (the author of this review) in 1992 for Marianne Lines, a descendant of the Spottiswoode family. The sound of the replica harp was fairly quiet, in the opinion of the writer it was never a really satisfactory instrument, more likely it was an ornament.

Submitted by Alasdair Macleod, 14 August, 2011
Notes and measurements are from Macleod's viewing of the harp.