Around 1891, according to the late Francis Collinson in his ‘The Traditional and National Music of Scotland’, (first published in 1966), Lord Archibald Campbell asked the firm of Glen, bagpipe makers in Edinburgh, to make three clarsachs. The object of the exercise was to stimulate a revival of the harp by adding a clarsach competition to the newly inaugurated National Gaelic Mod. According to Collinson, apart from those three harps Glens also made a number for other customers and for members of the Glen family. He then went on to state that one of these harps was presented to the Highland Folk Museum at Kingussie by Miss Russell–Fergusson (you may visit our page for the other Glen Harp by following this link). Until now it has been the only example of one of these harps whose actual location was known.

Unfortunately, Collinson makes a number of slightly confusing statements, including the suggestion that the harps were all modelled on the ‘Queen Mary Harp’ and since he does not provide any references it was never clear on what many of those statements were based. For example there was more than one firm of Glens, but it has always been a fairly safe assumption that it was the brothers J & R Glen who apart from making bagpipes also made, repaired and sold a variety of instruments, and in the person of John Glen were known to have taken a close interest in the historical aspects of Scottish musical life. There is also evidence that John Glen had not only examined the two Scottish harps but had also been involved in the making of a plaster cast of the harp now in Trinity College, Dublin, so John had been thought to be the most likely maker of Lord Archibald’s order. 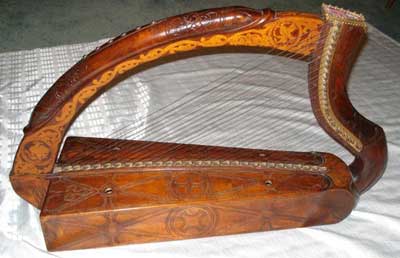 That was until recently when a harp made by Robert Glen in 1895 (from the original label still inside the soundbox) surfaced in Australia in what only can be described as in a very good condition, completely strung, and with a substantially made wooden case. Its provenance too can be traced back to the original owner as he and subsequently his daughter’s names and addresses are also written inside the lid of the case. From this we learn that his name was Theodore Napier and at the time of purchase he was living in West Castle Road in the Edinburgh suburb of Merchiston, not far from Napier Castle and originally part of the Napier owned estate, although the castle itself is now part of the campus of Napier University.

Theodore Napier was born in Australia to Scottish parents in 1845. He had been sent to Scotland for his education taking a degree in civil engineering, before returning home to then spend five years studying medicine. He returned to Scotland with his family around 1892, presumably to also have his children, two girls and a boy, educated in Edinburgh. He was a wealthy man although possibly a little eccentric. He was well known both in Australia and Scotland for frequently wearing highland dress and had formed the ‘Victorian Scottish Home Rule Association’ shortly before heading back to Scotland. 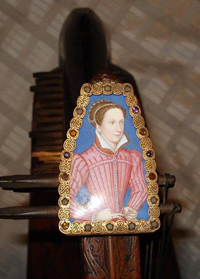 Napier was an avid supporter of Scottish institutions, giving prizes for highland games and in the Mod, as well as being an antiquarian collector. He had bought what was reputed to be Queen Mary’s Cradle and in 1896 published an erudite article on its background and acquisition.[1] In fact he seems to have had a special interest in Queen Mary; a report in The Scotsman newspaper for February 1909 mentioned that Theodore Napier had made his seventh annual pilgrimage to Fotheringhay to lay several wreaths on the site of Mary Queen of Scots last moments, it being the 322nd anniversary of her death.

This interest in the Queen also carried over on to the harp. In 1904 when the actual ‘Queen Mary Harp’ came up for auction at the dispersal of the Dalguise Estate on the death of its previous owner, Stewart of Dalguise, Napier had actually been one of the bidders before it was finally bought by the Museum.[2] It is therefore no surprise to find that the reproduction harp made for him by Robert Glen is closely modelled on the actual ‘Queen Mary’ even to the extent that it has added to it a picture of the Queen, where on the original harp either the arms or a picture of the Queen were said to have been mounted before being stolen during the 1745 rising.[3] 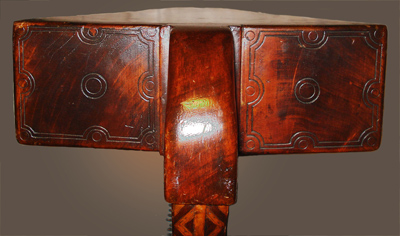 The sound box of the harp has been made from a solid piece of wood and the tree rings are still visible on its base. The pattern of the growth rings in relation to the bottom of the sound box suggest that two boxes may have been cut from the same piece of wood on a top–of–one to bottom–of–the–other relationship. If this was the case then a harp which appeared in private hands in England in the 1970’s which probably from its appearance is by the same maker, may possibly have utilised the complimentary sound box although its overall design is based more on aspects of the Trinity College Harp. Unfortunately the current whereabouts of this harp are not known although a number of photographs and a hands–on report from the time are still available.[4]

The appearance of this firmly identifiable Glen harp enables us to re–assess the harp now in the Folk museum at Kingussie stated by Francis Collinson to have been one of those made by Glens for Lord Archibald Campbell around 1891. Clearly the instrument made by Robert Glen is far superior to the Kingussie harp which has a constructed soundbox, bridge pins and little in the way of decoration. The Kingussie harp also has more in common with the Trinity College harp than the Queen Mary instrument on which it was supposed to have been based. However, although he never provided any evidence for his statement this does not mean that Collinson was necessarily wrong in identifying the Kingussie harp as a Glen. 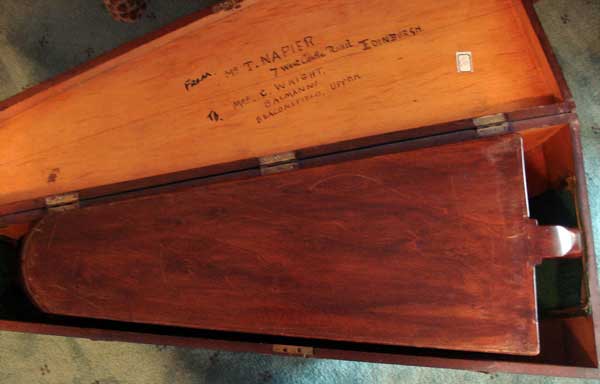 Back of the Napier–Glen Harp as viewed while it is in the case.
photograph ©2011 Moira Lawry

The harps made for Lord Archibald were commissioned to provide playable instruments with the intention of providing wire–strung harps for use in the clarsach competition he was sponsoring in the newly inaugurated National Gaelic Mods. Therefore those instruments would not have been expensive works of art carefully made to individual order. As we know that John Glen had in his possession a plaster cast copy of the Trinity College harp, neither were these necessarily based on accurate measurements of the ‘Queen Mary’ harp.

However the harp now in Australia specifically commissioned by Theodore Napier would have been a very different proposition. A lavishly decorated copy of the Queen Mary harp made by Robert, probably the superior craftsman of the two brothers, expense was clearly not a factor. Surprisingly there is no sign that any of Theodore’s family actually played the instrument in the competitions. His eldest daughter Zoe married John Farquharson, a local medical practitioner in 1903 and with her husband and children was still living in Edinburgh at the time of the 1911 census.[5] Theodore and his son Archibald, an agricultural student were also still in Scotland at their original address but Mrs Napier and the second daughter Winifred would appear to have already returned to Australia.[6] Theodore Napier died in Australia in 1924 and the harp passed down through his family until it was recently acquired in May of 2011 by its present owner. 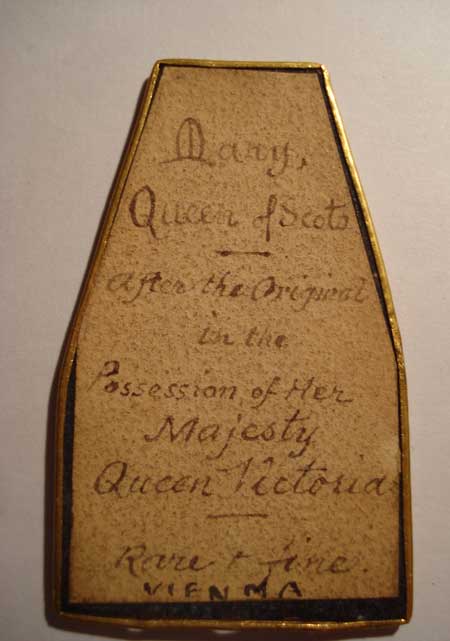 Close up views of the Mary Queen of Scots portrait affixed to the Napier–Glen Harp, and the legend written behind it.

[2] Abstracts from the Report on the ‘Sale of Stuart Relics in Edinburgh’ from The Scotsman newspaper of the 14 March 1904:

The famous Queen Mary’s Harp was sold by auction in Dowell’s Rooms, Edinburgh on Saturday, for the sum of 850 guineas, while the equally famous instrument known as the Lamont, or Caledonian Harp was sold for 500 guineas. Both harps, a full description of which has already appeared in The Scotsman, were the property of the late Mr J. N. Durrant–Steuart of Dalguise, by whose courtesy and public spirit they have long been familiar to the public as exhibits in the Scottish National Museum of Antiquities at Edinburgh. When it became known that the Stuart and Jacobite collection owned by Mr Durrant–Steuart was to be sold, there was some fear that the harps might be lost to Scotland, particularly as the sale was advertised in America, whence many of the ancient treasures of the old world have already found their way. It is satisfactory to know that that misfortune has been averted, and that one of the harps certainly and both probably will remain in Scotland, with whose history they are so closely identified. Queen Mary’s Harp was purchased on behalf of the Museum of Antiquities where it will in future remain, not as a loan dependent on the good will of a private owner, but as the inalienable property of the institution. The Lamont Harp was purchsed by Messrs MacKay & Chisholm, Princes Street, Edinburgh on behalf of a client, believed to be a Scottish gentleman, whose name the agents are not at liberty to disclose. It is understood, however, that there is some hope that the new owner will not be averse to the harp being replaced as a loan exhibit in the Museum of Antiquities. .............................

........Promptly at noon, Mr Glegg, the representative of Mr Dowell started the sale. There were then present as many ladies and gentlemen as the room could accommodate. Among the numerous clergymen present was Professor Cooper of Glasgow. Mr Thomas Gibson Carmichael, a noted collector was also an interested spectator of the sale, while, as might be expected on an occasion when some of Scotlandvs choicest relics were changing hands, Mr Theodore Napier stood watch and ward. In a room in which were strewn in picturesque confusion so many links with Scotland’s historic past, and the kilted, feather–bonneted figure of Mr Napier seemed not out of place..........

..........Then came the most precious items in the collection — Queen Mary's Harp and the Lamont or Caledonian Harp. For the former 100 guineas was offered. From several parts of the room there came bids of 50 guineas in rapid succession, There was no excitement. The bidders simply gave a nod of the head. Every nod meant 50 guineas, and the auctioneer understood. finally in less than two minutes 850 guineas was reached and the harp, amid applause, was knocked down to a representative of the Museum of Antiquities. Mr Theodore Napier took part in the bidding. The Lamont harp was put up immediately afterwards. Starting at 20 guineas the price quickly rose to 500 guineas, when amid renewal of applause, a representative of the firm of MacKay & Chisholm obtained the harp on behalf of a client......

[3] This portrait appears to be a copy of an enamel on copper portrait by W. Essex, Enamel Painter to Her Majesty & H.R.H. Prince Albert, now in the Royal Collection, which in turn was a copy of a miniature painted by Francois Clouet circa 1558 showing Mary Queen of Scots as a 16 year old future bride of Francis II of France.

[4] Information and pictures below courtesy of Paul Guppy. 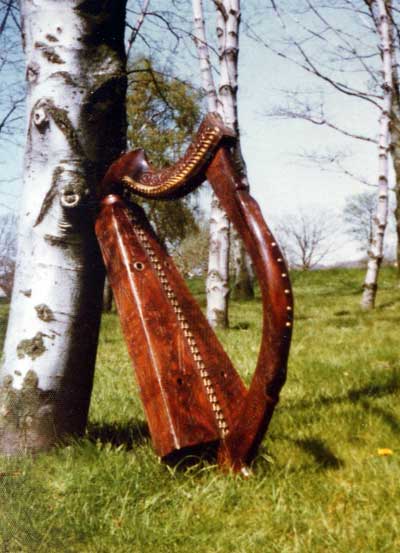 The possible Glen harp which appeared in private hands in England in the 1970’s. 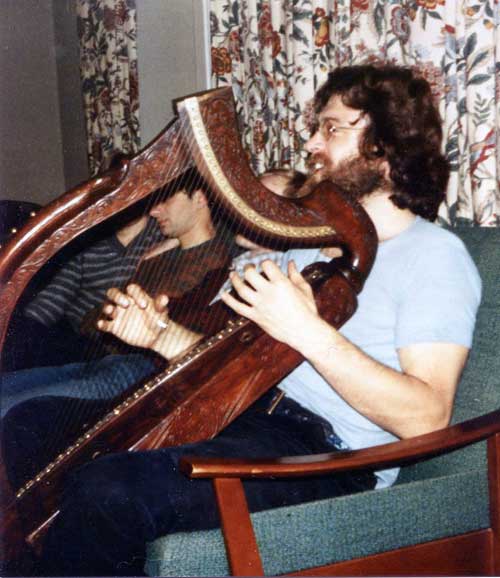 The Glen harp being played by Paul Guppy in the 1970’s.