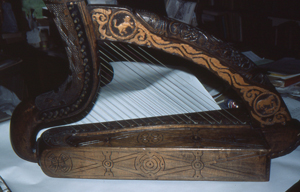 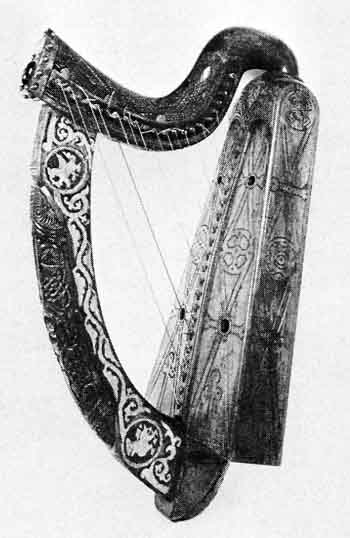 Russell Fergusson’s descriptions of this harp are with her pictures of it in the Mitchell Library, Glasgow:

Diatonic. After the style of The Queen Mary Harp, with monogram ‘ARL’ on pillar and Button Badge at head. 22 strings, which are fixed to the soundboard with screw nails. Harmonic curve with Highland hump. Quadrangular soundbox. Curved pillar.

Instrument supported on a ‘keel’; copiously carved and embellished with semi-heraldic animals and Celtic designs, leaves and crosses, especially on the sides of the pillar, where the high relief is pale yellowish in colour. The ‘Button Badge’ on the Copper Cap of the Harp bears the Crest and Motto of the Lindsay Family, i.e. BIRD ON TORSE, ENDURE FURT. Late 19th Century.

NOTE: Believed to have been purchased by Colonel Edward Malcolm of Poltalloch in Edinburgh, about 1900; it was acquired by the Compiler of this Collection, [Russell Fergusson], on the demolition of Poltalloch House in 1959, and was presented by her to the West Highland Museum, Fort William, Inverness–shire, where it now remains.