An Irish Harp at the Danish Court circa 1622

Over the first half of the seventeenth century there were three harpers employed at different times at the Danish Court of Christian IV (1588-1648). These were a Carolus Oralii, (Charles O’Reilly) between 1601 to 1602, Darby Scott, (Diarmait Albanach) between 1621 to 1634 and the Scottish harper, Edward Adam from 1634 to 1643; Adam having been previously employed at the Court of Brandenbergh. 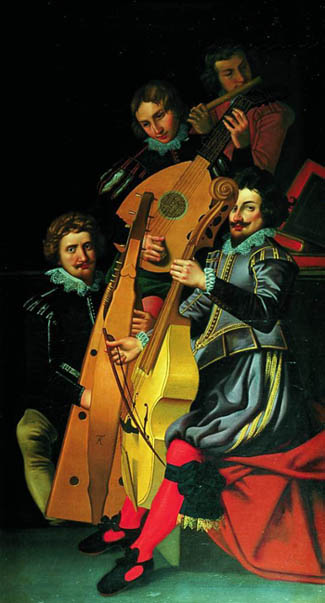 O’Reilly the first of these harpers had been recruited in England by John Dowland on a one years contract worth 200 daler. Dowland had also bought an Irish Harp for him along with extra strings at a cost of 104 daler.[1] According to the court records O’Reilly was entered on the 6 November 1601 and discharged on the 9 October 1602.[2] When it was approaching the time for the harper, along with Henry Sandon, a dancing master who had also been recruited by Dowland at the same time, to leave the court service King Christian wrote to his knight marshal that as we desire that the English harpist and dancer be discharged because their time is up, we likewise beg of you that you discharge them.. still you will have to keep the harp because we paid for it.[3]

It is not clear how the next harper Darby Scott was recruited but he seems to have been in post by the 25 September 1621 and was receiving a salary of 250 dalers. His name as recorded in the Danish Court records seems to have been an Anglicisation of Diarmait Albanach and there were several harpers named Albanach (or Scott) around at that period. A Ned Scott was harper to Sir Arthur Chichester in 1620 and Bunting makes reference to a John and Harry Scott from West Meath who would have been contemporaries. These were probably the four harpers called Scott who were described by Echlin O’Cathain as being brothers who lived around 1600. O’Cathain states that they lived in Munster while what is probably another member of the family called Rory Albanagh of Castleroe received a pardon from Elizabeth I in 1602. The line may go even further back since a West Highland harper called Donald Albanach is on record in Argyle mid 16th century. 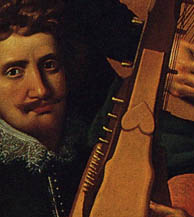 Detail of the harp from Timm’s painting of Christian IV’s musicians.

Fortunately the harper Darby Scott’s time at the court coincided with that of the artist Reinholdt Thim who worked at the Danish Court circa 1618/1624 and who was responsible for a painting of four of the court musicians which includes the harper. The harp is shown ‘straight on’ from the front providing a clear view of the broad fore pillar including the slight curve from the pull of the strings and adding authenticity to the accuracy of the artists work. The face of the pillar shows two decorations, the lower being a stylised RT and therefore are the artists own initials. The more curious decoration and apparently an original feature of the harp is a heart carved in high relief near the top of the fore pillar.

Exactly what significance the heart is meant to have is unclear. There are no heraldic connections to Ireland which would provide an explanation, but the Danish Royal armorial whose origins date back to a surviving Seal of King Canute VI from circa 1190, contains three lions surrounded by multiple hearts and still incorporates variations on that theme today. If that is the connection then it has implications for where the harp was actually made and when. It is possible that the instrument commissioned by Dowland in England for the use of Charles O’Reilly in 1601 might on the basis that it was for Christian IV’s court have had the Danish arms in mind, but although that harp may have simply been stored at court after O’Reilly departed the harps resurrection some twenty years later might be a little dubious.

Submitted by Keith Sanger, 22 December, 2017
Source for the painting of Reinhold Timm https://commons.wikimedia.org/wiki/