Proceedings of the Society of
Antiquaries of Scotland

The Society of Antiquaries of Scotland studies the historical artefacts of Scotland. The society began publishing the proceedings of their meetings in 1851 in a journal entitled Proceedings of the Society of Antiquaries of Scotland. Prior to that, between 1792 and 1890 the Society published under the title Archaeologia Scotica. The overlapping years (1851 to 1890) lead to some confusion regarding volume numbers. Volumes 13–24 are also called, in the new series, Volumes 1 through 12. For this reason, some references point to the volume of interest to the wire-strung harp as Volume III, while others refer to it as Volume XV.

On December 13, 1880 Charles D. Bell, a fellow of the Society, recorded the loan of the two harps to the museum by Mr Stewart of Dalguise. These harps are commonly referred to today as the Lamont Harp and the Queen Mary Harp. His descriptions and many beautifully detailed illustrations were subsequently published by the Society. The relevant pages are in the pop–up window to the right.

The resolution of the purchase of the “Harp called Queen Mary” as the Society termed it can be found by following this link to the Society's Report from 1905.

You may follow this link to an unabridged version of the Proceedings of the Society of Antiquaries where it is hosted by www.archive.org. 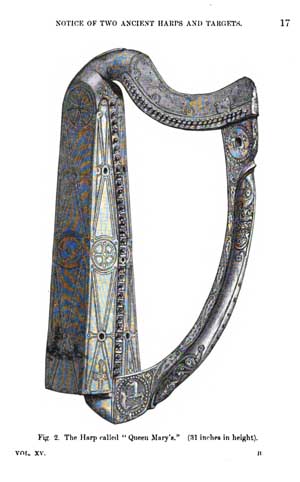 image of a harp from the above extract.