Back to Wood Index Page

American Woods in the Construction of Wire-strung Harps

These observations are addressed to the harp with a solid hardwood soundboard and the characteristic high tension of strings such a soundboard indicates and so they do not necessarily obtain for a harp of more moderate tension with a softwood or laminate soundboard.

There are many considerations which determine the suitability of an individual piece of wood for making a wire-strung harp: features in the wood such as knots and sap pockets, the pattern of the grain, how the wood was dried and cured, and such. There are other characteristics that are typical of each specific species of wood and the most important of these are: density, strength, and fineness of grain.

It might seem to be stating the obvious that the stronger the wood, the better. But this is simply saying that some wood is too weak to resist warping, cracking, and splitting when the harp is brought up to tension. Likewise the finer the grain, the more the wood is able resonate, so the finer the grain the better. Some wood is so coarse that it is altogether unsuited for harp making. Most pine and fir wood lacks the strength to endure the tension the strings exert on the soundboard or to resist the warp and torque the neck and pillar must withstand. On the other hand, oak is immensely strong but the grain is so coarse (and often irregular) that it has a muffling effect on musical resonance.

Density is different matter. It doesn’t go in a continuum of the denser the better or the less dense the better. Density of the wood certainly affects the harp’s characteristic sound but it is not an issue of good or bad, only different from one another. Dense wood has a very bright sound and sharp ring with a quicker decay. Lighter wood has a mellower sound and a more subtle ring with a longer sustain at the same intensity. Both are marvelous and one chooses the effect by choosing the characteristics of the wood.

In short, wood suited for making wire harps must be strong enough, of fine enough grain, and neither too dense nor too light to resonate well. 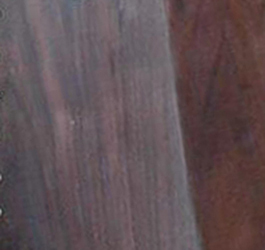 Within the limits of feasible strength, density, and grain is a large number of American woods well suited for wire-strung harp making. In general fruit and nut woods are ideal. Cherry and black walnut harps are common. By the bye, the ‘cherry’ tree in this case is not the sort from which one gathers fruit for a pie, but rather an immense hardwood tree common in the Eastern United States with tiny inedible fruit. Pear and apple wood are very good if one can find pieces of sufficient size with feasibly straight grain. Like black walnut, butternut is very good and even pecan (but not hickory due to its ponderous density.)

Other American woods that are good for wire harps are American sycamore (not the same as European sycamore which is a type of maple), mulberry, and sassafras. All these are light woods and resemble willow in acoustic characteristics. Basswood, sourwood, gum, and birch, are likely feasible and of course willow works well.

The queen of instrument woods is maple. It is not coincidence that most bowed and fretted instruments are made of maple. There are a number of different species of American maple and for woodworking purposes they are roughly divided into the groups hard-maple and soft-maple. Hard maple is sugar maple, hard-rock maple, and black maple. Soft maple is anything else but especially red maple and silver maple. All are suitable for wire harps, although the harder the maple, the more of penance it is to work it. Maple is immensely strong, very fine grained, and varies from moderately dense to very dense. In fact the harder of the maples push the limit for feasible density. 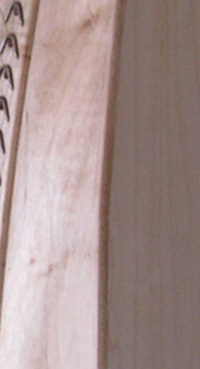 Softer, lighter woods are easier to work. You will often find that a maple harp costs more than an otherwise identical harp but made of an easier to work wood. One reason for this is how quickly tools and abrasives wear when working harder wood and the extra time spent with the sharpening stones.

There are a great many diverse designs and materials that will result in a good-sounding, easily played wire strung harp. The sound of these harps will all differ somewhat from one another. The degree to which they differ depends on how closely one listens. To the listener used to dealing in violin music or bassoon music one wire harp is going to sound very much like the next wire harp. But to the musician or aficionado immersed in the music and lore of the wire-strung harp, people to whom wire harps are “whittles and drink,” the differences can be stark. It depends very much on how closely you listen. Listen closely enough and you will detect all sorts of differences between one harp and the next …even some differences that are not really there at all.

The neck and pillar of the harp are somewhat a different matter than the sound box and soundboard. The wood must be strong enough to fashion the joinery and of sufficient grain and durability to hold the tuning pins. This adds a good number of other woods to the pot including ash, oak, hickory and others.

Nothing here must be taken to say that one cannot make a wire harp out of any type of wood with enough cleverness and skill, and, reasonable expectations for the results. But taking the wood’s density, strength, and grain into consideration will stack the odds in one’s favor. Yellow tulip poplar, abundant and cheap, has little to recommend itself for harp making. It is generally too light and disastrously splits even if one but looks at it the wrong way. Yet one of the best sounding harps I ever made was made of a unique piece of tulip poplar.