There are a number of different species of willow native to Ireland and Scotland ranging from shrub size to trees reaching up to 30 feet in height. It is included as one of the ‘commoners of the wood’ in the early Irish Tree list and its Gaelic name of ‘Sail’ makes no distinction of sub species. Found growing mostly in wet places it was frequently coppiced for the ‘willow wands’ or ‘rods’ which were used for making baskets and wattles. It appears to have been the most common choice of wood for making harps, especially the soundboxes. The older texts make no distinction regarding the exact species of willow, nor so far, do any of the identifications made of the use of willow for any of the museum instruments. Of the native species only three would seem capable of reaching a suitable sized trunk for making the sound box of a harp, Goat willow (S.caprea), Grey willow (S.atrocinera) and Bay willow (S. pentandra). 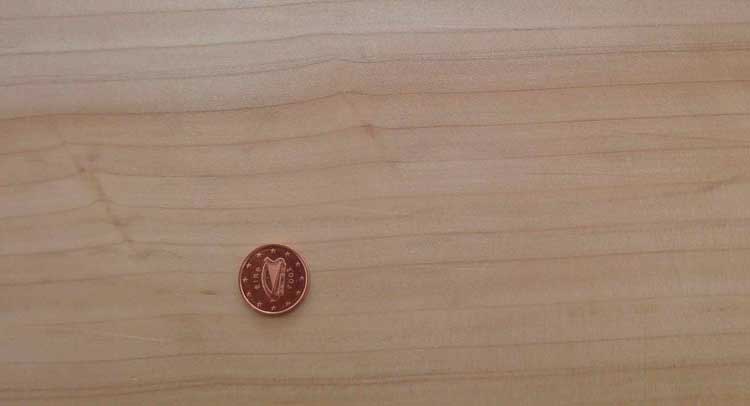 A section of Willow wood, quarter-sawn, planed but not polished. [Please note, the Irish penny is 16mm in diameter.]
Photograph by Michael Billinge

The problem is compounded by the fact that many species of willow hybridise and identification of species is more dependent on the nature of the leaves or catkins rather than physical examination of the actual wood. The largest and therefore probably the most suitable British willow in terms of ‘trunk’ size for making sound-boxes is the Crack willow (S.fragilis), but although currently found throughout most parts of the British Isles, it was not originally native to either Ireland or Scotland.

Willow cut across the grain on a diagonal as might be seen on the side of a harp with a wide tapering soundbox like those found on the Trinity College and Lamont Harp, planed but not polished. [Please note, the Irish penny is 16mm in diameter.] Photograph by Michael Billinge

Willow has a number of properties making it suitable for the sound boxes of wire strung harps. Physically although the timber is light in weight its fibrous structure gives it great toughness with flexibility and a resistance to splitting under duress, for example the impact that a cricket bat has to repetitively withstand every time a batsman hits the ball. However, the soft pulpy nature of the wood also has a tendency to naturally damp the small high-frequency harmonics produced by metal strings, whose energy can rapidly build up to an excessive level. This property, not necessary for gut strings could have been regarded as another of willows desirable qualities.