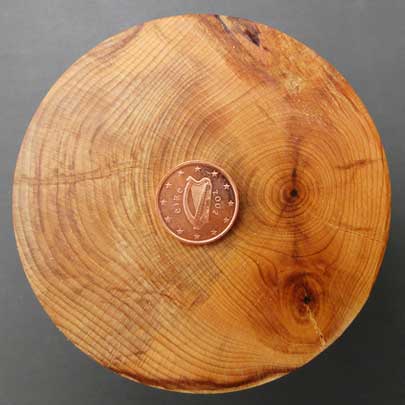 Yew is a slow growing timber, hence the closely spaced rings as revealed in this cross-section. [Please note: The Irish penny is 16mm in diameter.]Photograph by Michael Billinge

The Harmonic curve, (or neck as Rimmer calls it), of the Dalway harp is stated to be of this wood. A native British tree it appears in the Old Irish tree list as ‘Ibar’, (modern Irish Gaelic, iubhar) and was classed among the ‘nobles of the wood’. Lynch in his Cambrensis Eversus,(1662), speaks of the bodies of the Irish harp being made of Yew, (Taxo) or Willow, (Salice). 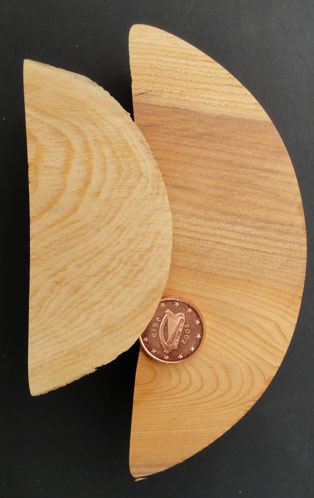 The piece of yew on the right is cut on the quarter and shows the marked difference in colouration between the heart–wood and the sap–wood. The piece to the left is a slice taken further out from the centre through the sap wood alone. [Both smooth sawn, but not planed or polished].Photograph by Michael Billinge

Slow growing and one of the longest living trees, it is a much denser timber than willow and is quite often used in general luthiery work. As the trunk grows larger however, it becomes convoluted and finding a suitable piece for a good sized soundbox without bark inclusions or chaotic grain may not have been easy.

Submitted by Michael Billinge and Keith Sanger, 5 May, 2011. Updated with new photographs on 13 August, 2011