The finished arrangement of Fingal’s Cave. Click on the image to open a printable pdf of the music.

You may download an individual mp3 file for Fingal’s Cave

Harpers often look for fresh ways to arrange music. Sometimes it is someone searching for authentic ideas to use with an historic instrument, but just as often it is someone who is just looking for something different.

An important model can be found in a hallmark of Scottish music, a style referred to by the names duotonic, double tonic or sometimes generally as dual tonality.

Mention these terms in the company of two other musicians, and an argument might well ensue. One musician will declare that there is no such thing. How can there be more than one tonic? The other musician may be more generous, referring to its possible genesis in the scale of the bagpipe, its usage by the composer Niel Gow, and may suggest that, while the term “has no basis of authority...it is a convenient one for the purpose.” [1]

Duotonality employs two essential tones. There is an at rest tone, called by some musicians the “home” of the tune. [2] This initial tonality underlies a musical theme. The tonality then changes, moving one tone (or whole-step) away. This creates tension, an “away” aspect against which the musical theme is repeated, also a tone away.

Consider The Drunken Sailor (example 1). The theme is stated, and then the same theme is repeated down one tone. The first appearance of the theme is “home” and the second is “away.” A duo–tonic arrangement characteristically uses an open fifth, much as a drone, underpinning and emphasizing this double tonality:

The two “tonics” of this example are D and C. As we study the melody, we see that the 3rd above the first tonic is a minor 3rd (D to F), while the 3rd above the second tonic is a major 3rd (C to E). Here is an interesting thing to consider: the minor sonority in this tune is the comfortable place, the “home.” The major sound is the unsettling one, the “away.” Try playing the example on your harp and stopping at the penultimate measure. Don’t “go back home.” You may find that you simply cannot leave it there, and must play the home tonic!

In a double–tonic piece, not one but two tones are vitally important. The debate is really one of semantics.

In common practice theory, the tonic is the one. We think of the “one chord” and the image of a Roman Numeral I comes to mind. We have been taught that the tonic is the most important one of many. The “home” may look like our I chord, but it is weak without the tension of “away.” And we want tension. This is why stories have protagonists like dragons that need killing, without whom the dragonslayer stays home and watches television, and who would want to read that story?

With these two equally important tones, we may allow them both to be called “tonic.”

Fingal’s Cave is here arranged in duo–tonic style, with open 5ths on only two key (important) tones (A and G) in the accompanying bass hand part. However, when I play this piece I like to raise the tension at the climax of the tune, in measure number 21, fourth from the end. That ending includes tonalities that are not limited to the two tonics. I have broken the rule here, but in a very calculated way.

One might ask, if “breaking the rule” works so well in measures 21 through 23, then why not use a more common approach for the whole tune? Why not use chords, why stay stuck with just two tones? 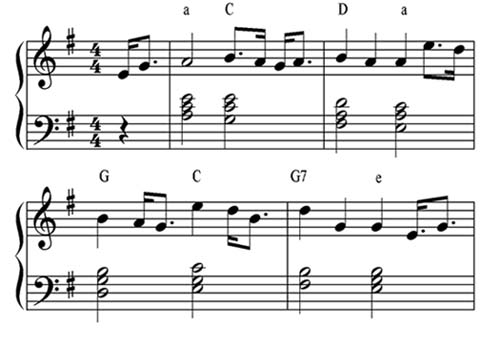 But here’s the problem: the first “C” in the melody of Fingal’s Cave doesn’t occur until nearly the end of the tune. Using chords, we not only have C’s from the first measure, we have C Major chords! Even if we were to merely fill in the A minor chord of our duo–tonic arrangement, we still introduce early in the tune a note that the melody has held in reserve for the climax. In a chordal approach, our ear’s familiarity with the C reduces its impact at the climax, just when it’s most important.

Try this experiment: first learn the arrangement provided via this link: Fingal’s Cave. After you know it well, play it with the chords as in example 2 (or come back to this webpage and listen to the recording here). You will find that it is a remarkable contrast. My preference is to stay true to the melody, and using dual–tonality achieves that goal.

This article was originally published in the Kilt & Harp, the journal of the Scottish Harp Society of America (Autumn 2004, Vol. 21 No. 2), pp 10–11. The arrangement was altered by the author specially for publication on www.WireStrungharp.com. Some fingerings were changed. In the original publication, two different endings were included, where here the arranger has included the one she prefers. The excluded ending continued with only the two open fifths as accompaniment.