Back to Revival Page

Banríon an Cheoil Concerts in Belfast and Derry

The following concert reviews first appeared in the Bulletin of the Historical Harp Society, March 2010. The concerts commemorated the Belfast Harp Festival of 1792 in which ten of the last harpers of the old Irish tradition performed, one of whom played in an even older style on a harp now known as the Downhill Harp. The concerts were part of a documentary that followed the construction of a replica of that harp as well as preparations for those performances. 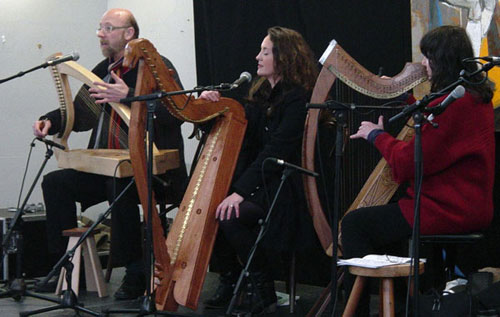 After 217 years, wire-strung harps are heard again in the Assembly Rooms in Belfast: Bill, Nollaig, and Bonnie at the start of the lunchtime recital.
Photo by Michael Billinge, used by permission.

These events took place as part of the Banríon an Cheoil documentary, and the producers’ intention was that the newly-built reproduction of the Downhill Harp would be played in a grand concert commemorating the famed Belfast gathering of harpers which was held in 1792. Their original hope was to bring together ten wire-strung harp players to perform in the same venue, the historic Assembly Rooms.

This building was also known locally in past centuries as “the four corners” because the milestones along the roads leading out of the city in all directions were measured from it.

Unfortunately, the property currently awaits a new owner and has been unoccupied and unheated for some time, so for various reasons it proved impractical to hold a large evening event there, and a new location was found in Derry. However, the idea of playing in the same room as Denis Hempson and the other old harpers exerted such a pull on us that we found ourselves unable to abandon it altogether; thus a smaller-scale lunchtime recital was conceived, to be held in addition to the main Derry concert. So it was that on the 27th of November, after 217 years, the sound of the wire-strung harp was once again heard ringing through the main hall of the Assembly Rooms in Belfast.

Taking part were: Bill Taylor from Strathpeffer, Scotland, playing an Ardival Kinnellan; Nollaig Brolly from Co. Derry, playing the Downhill reproduction built for the documentary; Bonnie Shaljean from Co. Cork, playing the willow and walnut harp I made for her in 1977; and Ann Heymann from Minnesota, playing a Witcher harp modelled on the Downhill and a clarsach styled after the Trinity College Harp by Kortier.

These harpers each performed a selection of tunes which included material from the repertoire of Denis Hempson, and afterwards J. B. Vallely gave a short talk on the history of the Assembly Rooms. The recital concluded with the Scottish piper Allan MacDonald, a Hebridean expert in pibroch and Gaelic song, who demonstrated how effective a set of small bellows-blown pipes can sound in conjunction with the voice. The four harpers were left with a feeling of honour and privilege at having been able to pay respect to their predecessors in this way.

The main concert took place the following evening at Cultúrlann Uí Chanáin, a newly-opened Irish-language and cultural centre in Derry City, where a total of ten wire-strung harp players were joined by the sean-nós (i.e. "old-style") singer Treasa Ní Cheannabháin, with Allan MacDonald acting as the presenter. In addition to Nollaig, Ann, Bonnie, and Bill – the four who played the previous day – the artists included Caoimhe Cooke, a young harper from Co. Derry; Paul Dooley from Co. Clare; Laoise Kelly from Co. Mayo; Alison Kinnaird from Scotland; Myrdhin from Brittany; and Alan Stivell, also from Brittany. 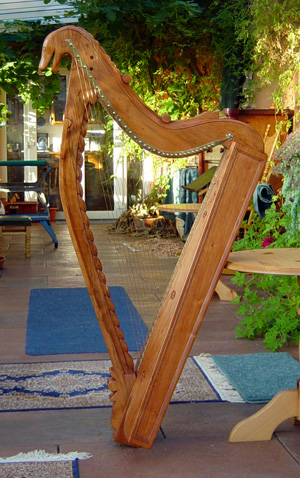 The finished reproduction of the Downhill Harp that was featured in the concert.
Photo by Michael Billinge, used by permission

The audience was treated to a fine variety of traditional and historic music from Ireland, Scotland, and Brittany, and once again the harpers all included some pieces from the repertoire of Dennis Hempson in their sets. The evening finished with Alan Stivell who, if anyone, must surely be considered the father of the “Celtic harp revival”.

In contrast to the others, his instrument was a steel-strung electric harp (something he’d first started developing back in the early eighties) and when I saw it being set up onstage beforehand, I had no idea what to expect. In fact it sounded beautiful: clear and bell-like, with no fancy gimmickry or effects, and fitted in with the rest perfectly.

The proceedings were being filmed and recorded under studio conditions, which meant various small delays for re-loading cameras, marking shots with a clapperboard, and doing a re-take after a microphone failure. Therefore the concert went on for longer than anticipated, but the full-house audience bore these necessary disruptions with good humour (and some of the musicians among them even found the energy for a short trad-session afterwards).

Everyone seemed to be aware that they had witnessed something special and historic. After all, when was the last time that ten wire-strung harpers performed on the same stage in Ireland? Perhaps 1792!