Back to Amplification Page

What is Amplification? Amplification is electronically enhancing sound to make it louder. Amplification is also a series of components known as a Sound System. Most people have little to no concept of what is involved because it is so far out of our normal day–to–day experience. Nearly every musician has, at one time or another, had someone ask if they can “borrow your microphone for toasts” — often enough, for toasts to be made in a different room from where the musician's speakers are located. What the client in this situation is actually asking us to provide is a Portable PA (Public Address) System, which includes a microphone along with a lot of other elements.

All sound systems have the basic configuration illustrated in Figure One. They all have a capturing device, usually a microphone, which converts the sound to an electrical signal that is then sent to some sort of a processor which allows for the adjustment of volume and tone quality or equalization (EQ). The signal is then sent into an amplifier which makes the signal stronger, and then finally the signal is sent to loud-speaker for the final output. All of this happens quite literally at the speed of sound. Without exception, this is how every sound system basically works:

There are thousands of variables that come into play within this single system. The type and quality of the microphone can change or color the sound. The processing of the signal can change the quality of the original by manipulating the signal to enhance the tonal qualities or frequencies of the sound. The amplifier is yet another link in the chain that can distort or change the sound, and finally the speaker or speakers can dramatically affect tonal quality for better and for worse.

Speaking of quality, the term, “you get what you pay for” really is an absolute truth in buying a sound system. The components of a sound system, from microphone to the speaker, need to be ‘matched’ to the instrument.

Obviously the gigging harper is thinking, “I don't want to lug all of this stuff, what is the simplest and least expensive solution?” A simple search will unfortunately not yield a simple answer. Most systems easily available were designed for another instrument, and even if it was designed for “harp” there are lots of different kinds of harp! Merely identifying an system designed by one harp֪producer for his or her instrument may not yield a system that is suitable for your harp, repertoire, and playing style.

To find the best combination for your situation, you may ask other players of similar harps what they have found works. You may also try various components before you buy them in some stores, it is worth asking and making the trip rather than purchasing by mail or internet if you are lucky enough to be near a good music store.

One simple and relatively inexpensive solution is to adopt guitar technology to your situation (see Figure Two) However, not everyone gets successful results with this set–up, it depends on how particular you are about your harp sounding like a harp. The guitarists have figured out the battery powered amplifiers which solve the problem of doing outside weddings when there is no electricity available. Feedback always seems to be the biggest issue with this set up. (Also be warned that you will need anXLR into ¼ inch adapter (see Figure Six below) for the amp if it does not have a Balanced line input, which will be explained in more depth later on).

The next combination that has works reasonably well is a powered speaker (see Figure Three). Unlike the guitar amp/speaker with basic tone control, the powered speaker is basically two speakers (a horn and woofer) which dramatically improves tone quality. The amplifier (power) is built right into the speaker. Some of these models also have some sort of built–in EQ (equalizer) to adjust tone quality.

The next step up is to bring a full system Figure Four which consists of two speakers on stands and perhaps an added mixer in the signal line (refer back to Figure One.) When you use a mixer, you can add additional microphones for another musician, adjust volume and tone for yourself and the other musician independently, and perhaps even add a player loaded with recorded music for break music. Obviously, this is now requiring more stuff to bring to the gig and requires more time to set up, not to mention a larger investment. The nice thing about ‘component’ systems like this, especially at the professional level, is that you can upgrade any one of the components as your desire, needs and financial resources change. Avoid Radio Shack, store brands or PA equipment sold for schools. Stay with professional grade gear made for musicians and sold by an authorized dealer. Companies like Mackie, Tapco, Electro–Voice, JBL, QSC, Fender, Yamaha, Shure, Peavey, Behringer and Ultimate Support all have road worthy gear.

A note about microphones: There are hundreds of different kinds of microphones. Some are specifically engineered for live sound reinforcement and others are designed for studio work only. You want to do your research here to insure that you get the best microphone for your instrument and application. Just as no two harps are the same, the same can be true with microphones. Possibly the best type of microphone for use with the harp is a cardioid pattern mic. These microphones offer the best feedback rejection. Some of the higher end condenser microphones (more sensitive microphones) require a little extra power to keep the signal at its purest, this is called Phantom Power. If you are not using mixer which has Phantom Power and are using a microphone which requires Phantom Power, you need to buy a little box to provide the power boost, which of course becomes another component in the signal path.

Another possibility for your microphone is to get a clip–on model as is often used on fiddles and saxophones. If you have an open backed harp, you simply clip it on the opening and tilt the goose–neck into your harp. Using such a microphone on the front of your harp, through one of the holes in the soundboard, may work or it may interfere with the sound production of the harp and may not adequately capture the sound. Consider these factors if you choose to put the microphone in contact wtih the soundboard.

Once you find a good microphone — one that you know makes your harp sound like the original acoustic sound — then all you have left to do is to balance the tone with your mixer or powered speaker, and work on speaker placement. (Keep the microphone pointing away from the speaker as much as possible to cut down on feedback). 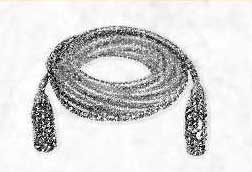 Another important part of the puzzle is good wiring. Figure Five. All professional microphones are three–pin XLR into XLR (male and female ends) also known as balanced low–impedance audio lines. Take good care of your microphone cables. Good cables cut down on self–noise and have electromagnetic shielding to ground and minimized stray electric fields. Poor quality cables and mishandling are often the culprit of –no signal– as they can and often do go bad. Learn how to wrap cables carefully. The next time you buy a mic cable, ask the staff person helping you to show you how to wrap them properly. If that is not possible, then ask a sound engineer, maybe someone at one of your jobs. The engineer will be impressed, and you will be able to check off your list one more thing that can potentially go wrong. Even with care, you will find that you need to replace your cables every so often. 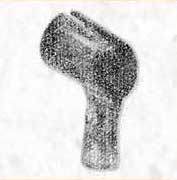 Microphones need to be mounted on microphone stands using a ‘Mic Clip’, as shown in Figure Six. Always carry a spare or two, as they can break (and they are relatively inexpensive).

You are probably realizing there are a lot of things to remember. Before your first gig with your sound system, make a careful list of all of the components you need to pack. Besides the components so far discussed, you will want to remember to bing an extension chord to get your electricity from the wall, power chords to go into mixer or powered speaker, microphone cables and clips, batteries if needed, black duct tape. This is your ‘pull list’. Use it every time you pack for a job, and every time you pack up after the job so you don't leave your nice microphone sitting on the chair back at the gig.

This brief over–view would be incomplete if we did not mention Piezoelectric (Piezo) Transducers or Pickups as your signal capturing device, instead of using a microphone. These can either be permanently or semi–permanently installed inside the harp. They work on a different principle than a microphone by converting vibrations of the wood (not sound waves) into electrical pulses. Like an electric guitar, all you have to do is plug in your instrument cable from your mixer or amp right into the harp. This type of system usually requires a pre–amp to be put in the line, between the mixer and the amplifier. A pre–amp prepares the electronic signal prior to going into the amplifier of your system. For more on transducers, please visit us in future for our Transducers/Pick–up page which is currently under review. (Planned launch-date is late September, 2011).

In an ideal world, you would not have to know anything about microphones and sound systems. The realities of our noisy world and big concert halls make that nearly impossible. Do be aware of the times when sound–reinforcement is not necessary: healing harpers are an obvious example, but so to are some early–music performances. Do check the room’s acoustics first, and see if you really do need to set up your sound system.

With that said, if you are a professional or you are on track to become a professional musician and want to share your music to a wider audience, knowing a little something about sound reinforcement is one of the skills you should have. There is no easy answer or one stop solution when it comes to sound amplification and reinforcement. The solution is somewhere in between your level as a musician, particular harp, budget, needs and applications. Not to mention your comfort level with electronics, problem solving, electricity, your physical ability to set up, carry heavy equipment, and even the size of your car’s storage capacity.

Return to the top of the page

or go back to the main Amplification Page