Back to FAQ Page

It is generally known that the word ‘clarsach’ was a relatively late arrival on the scene and had a more specific connection to the wire strung harp now usually called by that name rather than the more generic Gaelic word for a stringed instrument of 'Cruit'. However, the exact origin of the word Clarsach still presents some problems, which it is possible to suggest look more daunting than they really are. Starting at the beginning with the easy part first, in both senses it is clear that the ‘root’ of the word must be the Gaelic word ‘Clar’. 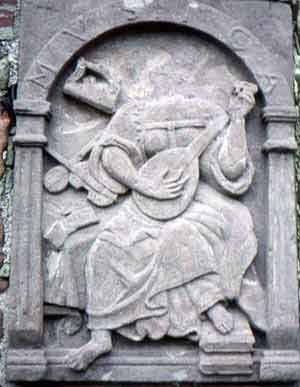 A clarsach depicted with ‘Musica’ in the 1604 garden wall at Edzell Castle, Angus.
Please click on the image to view a larger size.
Photograph by Keith Sanger ©2012 WireStrungharp.com

Clar is a ubiquitous Gaelic word which in origin seemed to indicate any sort of smooth flat surface but from there moved on its own or in combination as the prefix to other words to have a variety of meanings including a trough, wooden tray and a board or plank. In a more modern usage and also having a musical connection it is often used to describe records and compact discs. In regard to its application to the harp it has been noted elsewhere that perhaps the earliest example of that use was a thirteenth century poem by Giolla Brighde Albanach in which he uses the phrase ‘chlar shoileach’ to describe how ‘fair hand never played on willow board, strings as musical as his speech’.[1]

Given ‘Clar’s other meaning as a trough and the nature of the soundbox of the instrument carved out of a solid piece of wood it was tempting to have expanded the translation into ‘a hollowed out willow block’ but the exact chronology of the various meanings of ‘Clar’ are uncertain and it is possible that the ‘trough’ usage came later than the date of the poem. From this evidence of linkage to a stringed musical instrument it was possible to suggest that ‘Clarsach’ was a contraction from chlar shoileach, assuming of course that chlar shoileach was not itself just a poetic expression and the instrument was already called by just the root word ‘clar’.

Contraction simply means to shorten but in the context of words or phrases there is some degree of overlap with other definitions, for example abbreviation. The statement that ‘LA is on the west coast of the USA’ uses two abbreviations which can make sense both as written and as spoken. They are also a form of contraction which were used by the early scribes and clerks to save writing time but many two letter contractions have to be expanded when spoken, for example Mr and Mc for ‘Master’ and ‘Mac’. In other cases whole words or parts of words are left out in the written form, but this can also be driven from the other direction with contraction of longer written forms following the colloquial usage in every day speech.

Perhaps one of the best examples of a number of different processes in action is a small Scottish Burgh on the shore of the river Forth. Near Linlithgow, in West Lothian, it’s called Bo’ness both in speech and on the map. The apostrophe more apparent in the written rather than spoken form indicates that there has been a contraction but that was only the end stage of the changes over time. The name started as the personal old English name Beornweard along with tun or farmstead. This was later assimilated to Borrowstoun, Scots for ‘burgh town’ or town with a charter to which was added ‘ness’ meaning a promontory and giving the complete place the name of Borrowstounness. Hardly surprising that it got shortened in speech followed in turn by the mapmakers.[2]

The tendency to shorten words or phrases has been an ongoing human trait and turning specifically to musical instruments there are a number of more modern examples. The cello was formerly the ‘violoncello’ while the tuba was originally called the ‘basstuba’ before they both lost the first parts of their names. In the case of the ‘pianoforte’ it was the last part which dropped off to simply become a piano. Turning to the ethnically more closely connected instruments to the clarsach, in general usage both the Irish and Scottish bagpipes tend to be referred to as the pipes unless the context requires more specific detail. So given the tendency to shorten names irrespective of whether ‘Clarsach’ came about as a contraction of chlar shoileach or was already known by the short word Clar, the real problem is why did the already brief Clar expand by adopting a feminine suffix to become Clarsach?

The ‘problem’ however may not actually be a problem at all but the answer, by definition, can only be built on circumstantial evidence which requires looking at the context of the period when the use of the term clarsach had become commonplace. It has to be appreciated that the Gaelic society of that period was very definitely a masculine world. The professional poets along with all that surrounded them including the professional musicians were all men. Even as late as the end of the 17th and early 18th C, tradition records that at least two female Gaelic poetesses, Mairghread nighean Lachlainn, (of Mull) and Mairi nighean Alasdair Ruaidh, (associated mainly with the MacLeods) when they died were said to have been buried face down due to having composed in metres that were the prerogative of the male poets.[3]

Whether those traditions are correct is really immaterial, it is that image of a male society surrounding the instrument which provides the clue and that is the tendency by men to feminise possessions. A tendency not just applicable to Gaelic society either; in English all boats are ‘she’s’ and I have even heard vintage cars referred to as ‘the old girl’. The topic in terms of Gaelic has been explored in depth by Raghnall MacIlleDhuibh, (Ronald Black), in an article called 'The Feminine Principle' in his series under the general title ‘The Quern–dust Calendar’ which ran in the West Highland Free Press some years ago.[4] As he states ‘the principle extends beyond vehicles, not merely to guns but also to clothes, musical instruments, pretty much anything that could be defined as a manufactured object held in affection by men’.

A number of examples of feminisation were given including MacCrimmons pipes and MacDonald of Achnabie's fiddle, both in the 18th C, but as a principle judging purely by the ‘sexing’ of boats it goes back a long way. In connection with the harp an example occurs in the circa mid seventeenth century poem by Pierce Ferriter (died 1653) on a harp he had been given. In the poem he uses both Clairseach and Cruit the older word for a stringed instrument for ‘harp’, but throughout the poem the harp is definitely feminine.[5]

Within that context of the harp in medieval Gaelic society being the province of professional male harpers, the feminisation of Clar with its female suffix completely fits that pattern and becomes easily understandable. It is also amusing to reflect that if this solution to the problem is correct the question arises whether the modern tendency to use the description clarsach to cover all manner of small harps, now predominantly played by women, represents an example of emancipation or a shackle to the past?

Back to FAQ Page