The Dalway Harp or FitzGerald Harp

Also known as the The Cloyne Harp, or
The Ballymaloe Harp, or John FitzEdmund FitzGerald’s Harp 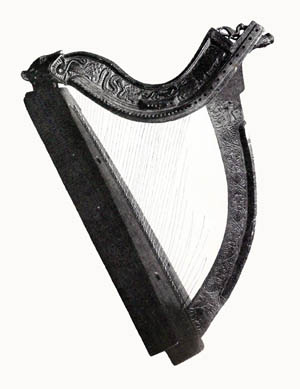 Photograph from The Irish and Highland Harps
by Robert Bruce Armstrong
The missing portion of the pillar and a probable box supplied by R.B.A.

This harp was made for John FitzEdmund FitzGerald of Ballymaloe, near Cloyne, County Cork. Note that this is not now a complete instrument. The soundbox has been missing for over two hundred years. In the illustration of the entire harp found on this page, the soundbox represented is a “probable box” by Robert Bruce Armstrong.

For nearly two hundred years this harp was generally referred to as The Dalway Harp, or The Dalway Harp fragments, because of their long previous ownership by the Dalway family of County Antrim. However, in the early 1990’s the National Museum of Ireland starting calling it The Cloyne Harp, and today both names may be met with.

For Robert Bruce Armstrong’s account of this harp, see The Irish and Highland Harps pages 65 through 70. Be sure to view the photograph on the un–numbered page facing page 65. These pages contain photographs and drawings, detailed descriptions, measurements and observations on this harp.

A comprehensive examination of this harp was published in May 1987 by Michael Billinge and Bonnie Shaljean in the Journal Early Music volume XV number 2, entitled The Dalway or Fitzgerald harp (pages 175–187).

The front of the fore–pillar, image from The Irish and Highland Harps by R.B.A.

Image of the side of the harmonic curve, from The Irish and Highland Harps by R.B.A.

Image of the side of the fore–pillar, from The Irish and Highland Harps by R.B.A.