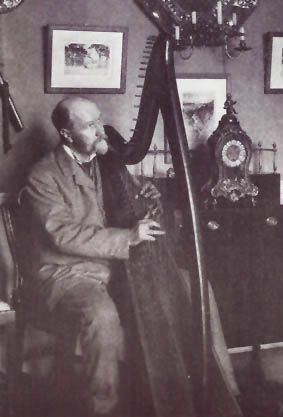 Robert Bruce Armstrong published The Irish and the Highland Harps in 1904. It remains to this day the greatest single work on the subject, although it contains a few errors and misses information that has since come to light. He was also the first, in effect, to catalogue these instruments. Thus Armstrong’s volume has been chosen as the framework from which we will explore the historic instruments in greater detail.

These harps are presented and linked in the Historic Harp Table below, listed in the order in which Armstrong covered them in his book with the exception that the two oldest Scottish harps have been moved to the front of the list in order to place the three oldest harps together. Please also note that the information presented on these pages will continue to be in a state of development as matters progress.

Beyond the harps Armstrong specifically included in his work, we have also chosen to include harps which have come to light since. As did he, we also include harps that may no longer exist but for which there is sufficient information to be of interest.

We have chosen a cut–off date of 1850 for the historic harps, as distinct from modern or replica harps, primarily because this allows for the inclusion of the Society harps, Egan, etc. while also pre–dating the modern period of interest.

Below is a listing of the harps which have survived from what may be called the “pre-revival” period. We may debate where and when (and if) the revival began, but this is a subject for the Transformation and Revival pages of this website. Each harp’s name below opens a link with further detailed information, where available.

Thought to be the oldest surviving wire–strung harp. “This harp is of somewhat great antiquity, the box is formed out of a solid block of wood and hollowed out from behind.”
(Robert Bruce Armstrong (RBA), page 159)

“An exceptionally fine example of the Highland Harp.”
(RBA, page 158)

“The earliest specimen of the wire–strung Harp to be found in Ireland.”
(RBA, page 55)

“These mountings are exceptionally fine, finer than any other known specimens.”
(RBA, page 64)

The Dalway Harp Also known as the Fitzgerald Harp, The Cloyne Harp, or The Ballymaloe Harp

The only surviving chromatic wire-strung harp. “The harp has 45 strings in one row, and also seven additional strings on the left side.”
(RBA, page 65)

“This Harp, remarkable for size, form and decoration, was apparently made in 1672 for Robert, second son of George, the sixteenth Earl of Kildare.”
(RBA, page 70)

This harp once owned by Patrick Quin one of the harpers who attended the Belfast harp gathering of 1792.

The Sirr Harp
or Royal Irish Academy No. 1 sometimes called The O’Neill Harp

“The head of the Irish goshawk is carved on the top of the pillar.” (RBA, page 82)

The Royal Irish Academy No. 2
Perhaps better known as the Carolan Harp

There is an incised carving of the badge of O’Neill upon the harp.

Made by Cormac O’Kelly, this harp is inscribed, “He raised me up to that degree, Queen of Musick yu may call me.”

“This harp is the only known specimen of considerable antiquity the box of which is not cut out of a solid block.”
(RBA, page 96)

A Harp by John Egan

“Egan, when constructing this Harp, must have had an ancient Harp before him, the form of which he followed with slight variations.”
(RBA, page 100)

The Harp at South Kensington
often called The V & A Harp

“A harp which was presented to the Victoria and Albert Museum in 1872 by the Ven. Archdeacon Saurin as having belonged to a celebrated harper.”
(RBA, page 102)

“A harp of a late period, it once belonged to Mary, Countess of Charlemont.”
(RBA, page 105)

“Harps made for the second Belfast Harp Society by Egan.”
(RBA, page 105)

“Formerly the property of Mr. John Bell, a native of Scotland who moved to Ireland early in life.”
(RBA, page 107)

Privately owned for generations by the O’Conor Family

Two individual harps which belonged to the late William Kearney

Documentation of a harp that was once owned by the Reverend Best and presented to the Royal Irish Academy.

The Harp of John Hunt

A harp that once belonged to the antiquarian John Hunt.

...to be continued (as there will, hopefully, be more harps uncovered in due course.)

Harps that no longer exist, but for which there are interesting descriptions or depictions

The Frazer and Llangattock Harps

A harp that was in the possession of Jonathan Hehir in 1786.

A harp which belonged to Captain Arthur Magenis of Cabragh

Some interesting descriptive notes concerning the harp played by Rose Mooney at the 1792 Belfast Harp meeting.

This Historic Harp Table is being developed with the editorial advice of Michael Billinge.