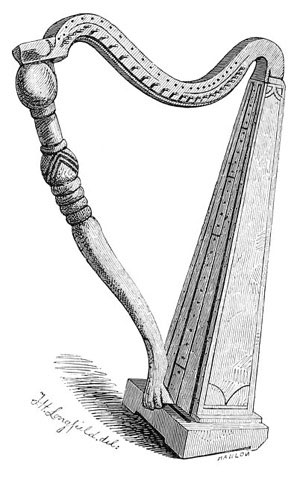 The harp belonging to Dr. Frazer
Drawing from Proceedings of the Royal Irish Academy, Vol. 16.

In 1879 Dr. William Fazer exhibited a harp in his possession at a meeting of the Royal Irish Academy. The following account of this presentation was published a few years later:

The Irish harp which I now exhibit to the Royal Irish Academy came, through chance, into my possession a few years ago. I regret it is impossible to trace its previous history beyond the statement of the person from whom I procured it, that it was purchased in a sale in some gentleman’s house in the country, where it was kept as an ornament in the hall, and that he was told it had been so preserved for several years.

When Herr Sjoden, the distinguished professor of harp music, lately visited Dublin, to perform on his favourite instrument during the celebration of the “Moore Centenary,” I had an opportunity of showing this harp to him, and it was from the special interest he took in it that I am induced to exhibit it this evening. He was attracted by its classic shape and the elegance of its construction, and at once directed my notice to the peculiarity in the number of its strings, which I will mention afterwards. He considered it possibly an unique example of the harp in common use about the time of Elizabeth or early in the reign of James I., that is ascribing to it at least an antiquity of 250 years. At all events it deserves notice from its state of preservation, and is a good example of the small portable variety of Irish harp, such as we would suppose a native harper to carry with him in his travels through the country from castle to cottage; and it is to the employment of instruments like this that the traditional knowledge of our ancient Irish airs must have owed their transmission from distant ages.

The striking and handsome shape of this harp is well exhibited in the accompanying woodcut from a drawing, made for me through the kindness of my friend Mr. Thomas Longfield. The instrument rises from an oblong pediment serving as a base, and which measures 11½ inches broad by rather more than 6 inches wide. It varies in depth from 2½ inches at the front to 2 inches behind, sinking gradually from the front backwards. The harp itself reaches to a further elevation of 28 inches above this pediment or base, measured to the loftiest point of its upper arm, which forms a graceful double curve. The main pillar of the instrument is 27 inches high; on its posterior surface are two sounding–holes of rather large size and of heart shape: the holes on the sound–board are protected from injury, by overstretching of the harp–string, by the simple device of a curved piece of metal wire inserted at the upper edge of each sound–hole. There are twenty–six keyholes, and a similar number of metal pins or pegs for straining the wires and keeping them in tension: the keys themselves are wanting. The front–pillar, which presents a curve of pleasing outline, is carved in its centre in rather rude and primitive pattern, but it ends in a claw of an animal, which, from the spirited mode of its representation, forms a suitable termination to the pillar. In the Catalogue of Musical Instruments, published by the South Kensington Museum, and edited by Carl Engel, there is an engraving of an early harp, taken from the manuscript of the monastery of St. Blasius, in which the front pillar of the harp is terminated by a claw, very similar to that now figured, which attaches it to the lowest part of the instrument.

The number of strings in this harp, shown by the key–holes, by the straining–pegs, and the holes in the sound–board, was twenty–six only. According to Sir W. Ferguson the Irish harp was “usually strung with thirty strings, being a compass from C to D in alt, comprising the tones included between the highest pitch of the female voice and the lowest of the male, being the natural limits within which to construct the scale of an instrument intended to accompany vocal performances.”

The highly ornamented and celebrated harp which is preserved in the museum of Trinity College, and usually called the harp of Brian Boru, but which has been stripped by modern investigators of its romantic antiquity, and is now considered to have belonged to some distinguished person of the tribe of the O’Neils, whose armorial bearings it displays, was supposed, through some error, to have only twenty–eight stings. Dr. George Petrie, in his examination of it, found there were thirty tuning pins and corresponding string–holes, which would appear to be the average number. This harp is well known for its beautiful decoration carving; it measures thirty–two inches in height.

The Gardyn harp, described in popular belief as the harp of Mary, Queen of Scots, is also described by Petrie as having thirty strings; and, from his scrupulous accuracy, that is probably correct. However, in a recently published Cyclopaedia on musical matters, I find that twenty–eight strings are mentioned as being the exact number.

This far more humble harp which I here endeavour to describe belongs to a different class of instrument. It is plain and simple in its construction, though possessing great ecclesiastics or the hands of wealthy nobles, but for the daily use of the wandering bard. What I have said of its construction is simple matter of description; still there appears to have once been some additional figure or ornament at the upper part of the front pillar; what this might be is mere conjecture. Upon the Irish silver coins of the first James the harp is represented with the ornament of a bird's head, and it is allowable for us to supply a similar device where it seems deficient; or we may prefer a more graceful female head, such as figures on the copper Irish coinage of Charles II., and upon the succeeding copper coinages of our kings; it is equally probable and at least better looking than the head of the bird, for an ornamental termination to the pillar.[1]

After Frazer’s death the harp was sold, and R.B. Armstrong provides us with this further information:

At the sale, in March 1900, of the antiquities which had belonged to the late Dr. Fraser, what was stated to be a seventeenth century Irish peasant's Harp, of carved and painted wood, was disposed of. The purchaser of the Harp has informed the writer that it has twenty-six string-holes and twenty-six holes for tuning-pegs. The box is built up or constructed of several pieces. The fore-pillar is curved, but has no T formation. The date ascribed is not likely to be correct. This Harp was described, and an illustration exhibited, at a meeting of the Royal Irish Academy in May 1879.[2]

An envelope pasted onto the inside front cover of Robert Bruce Armstrong’s own personal copy of “The Irish and Highland Harps”, now in the library of the Royal Irish Academy, contains a picture cut out from a copy of the Connoisseur. On this Armstrong has written: “In collection of Lord Llangattock at Hendre, Monmouthshire”. Later on in this same volume, inserted between pages 108 and 109, Armstrong had written a note concerning this harp which reads as follows: 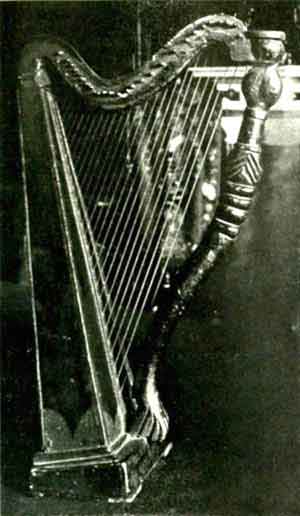 There is an illustration of what is stated to be a “Bog–oak Harp, found in Irish bog” again p 154 “On one Cabinet stands a genuine old Irish harp of bog oak, which was dug up in a bog in Ireland some years ago. It was then in a dilapidated condition, but has since been restored.” The Harp is at The Hendre the residence of Lord Llangattock. It appears to have the metal bands for the tuning pegs but the lines of pegs take the form of double curves. The body is evidently built up. There is no T formation and there are only 26 strings. The harp is comparatively modern and is probably of the same date as Dr Fraser’s harp already noticed. It is not likely to be of bog oak or to have ever been found in a bog unless placed there intentionally.[3]

At first sight these two harps look like the same instrument, and it might be tempting to assume that after it was auctioned in 1900, Frazer’s harp found its way through the antiques trade into the possession of Lord Llangattock. However, Armstrong was clearly in communication with the new owner of Frazer’s harp shortly after it was auctioned, and it is apparent from the note above that he did not believe that the instrument pictured in the Connoisseur was the same harp. Indeed, a closer examination of the two illustrations reveals that the harp belonging to Lord Llangattock (shown in the later of these) is the more complete instrument. Not only does it have its tuning pins and strings, but the section of decoration that Frazer reports as missing on his harp appears intact on the pillar of the Llangattock.

Without having further details there is still an outside possibility that the Llangattock harp is Frazer’s harp “restored”, but for now the likelihood seems to be, as Armstrong suggests, that these are two separate instruments built to exactly the same design. Should this be the case, it is possible that these were not the only examples built to this pattern. It may in fact be an indication that someone during the 19th century was producing small wire–strung harps on something more than a one–off basis.

[3] Robert Bruce Armstrong’ papers, cataloque entry number 48 under “Additions and Inserts” in the main body of the text of his personal copy of The Irish and Highland Harps housed in the Royal Irish Academy. The catalogue of those papers of R.B. Armstrong is hosted by WireStrungharp.com.

Michael Billinge
Ireland
Submitted to this site on 7 December, 2011