Owned by Jonathan Hehir in 1786 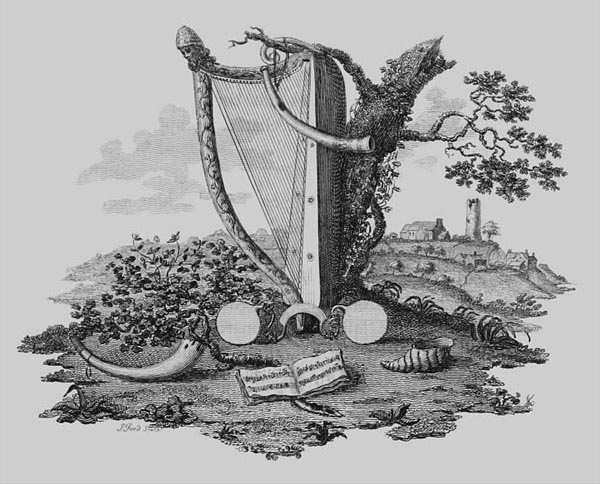 “Trophy” printed on page 1 of Joseph Cooper Walker’s The Historical Memoirs of the Irish Bards.

The illustration (or “Trophy”) on the left of the screen was printed on Page 1 of Joseph Cooper Walker’s 1786 work The Historical Memoirs of the Irish Bards. Further into this publication Walker added the following brief information:

"The Harp in the Trophy is a faithful delineation, by William Ousley, Esq; of Limerick, of one in the possession of Mr. Jonathan Hehir, of that City. This Instrument contains thirty–three strings, is five feet high, and seems to be made of red sally. But its antiquity is not remote, for we find the following inscription on it: “Made by John Kelly 1726.”[1] 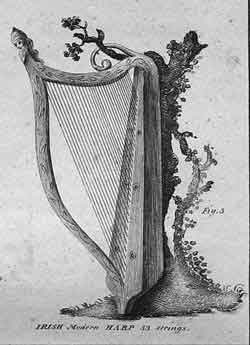 Ledwich’s illustration of the Hehir harp.

Four years later a crude copy of this drawing was reproduced as Fig. 3 of plate XVIII in Edward Ledwich’s The Antiquities of Ireland, where it was used to illustrate William Beauford’s essay and titled an Irish Modern Harp (i.e. of the 18th century). [2]

In a letter to Eugene O’Curry, c.1860–62, George Petrie made mention of the Hehir harp cited by Walker, but informed him that “[although] I trust [the harp] is still preserved in the county of Limerick... What has since become of it I know not.” [3]

Armstrong’s copy of Walker’s drawing. (1904)
Please click on the image for larger version.

When Robert Bruce Armstrong turned his attention to this instrument in The Irish and Highland Harps in 1904 he accurately copied the illustration from Walker’s Trophy but without the paraphernalia. He also repeated the information given by Walker, adding some description observed from the drawing. As to its whereabouts, he stated “nothing is known by the writer concerning it”. [4]

Since no trace of it has been noted since Walker’s publication it is reasonable to speculate that this harp is no longer in existence.


One interesting piece of information given by Walker is that the harp was made by John Kelly in 1726. This is very likely to be the same John Kelly who made a harp for the Rev. Charles Bunworth, Rector of Buttevant in County Cork, some eight years later, which is now generally known as the Bunworth harp (Armstrong appears to have assumed this to be the case.[5]) Upon comparing these two instruments, one feature they have in common immediately becomes apparent, which is the pronounced carved “loop and scroll” at the top of the neck near the shoulder.[6] This, though not unique, is certainly unusual, for there is only one other harp known to share this motif, the Mulagh, or Mulagh Mast, harp.

The Mulagh harp in turn has a number of other similarities with the Hehir harp, for not only do they both bear the “loop and scroll”, but they also have the same number of strings (33), their soundboxes are visually alike, and the neck of each appears to be slotted into the front and top of the soundbox in a similar fashion.

Features common to these instruments do not end there, for the same method is used to form the neck-to-soundbox joint for both the Mulagh and Bunworth harps. Also, the shape of the top of their soundboxes is virtually identical.

At the time Armstrong wrote his work he was unaware of the existence of the Mulagh harp, and had he known of it he would surely have commented on the likenesses between these instruments. All things considered there is a strong possibility that all three harps — the Hehir, the Bunworth and the Mulagh - are the product of the same maker, John Kelly.[7]

[5] Ibid, p. 93, Footnote 3. ‘The district in which John Kelly resided has not been noticed, but he probably belonged to the south of Ireland, as the two harps made by him of which we have illustrations and notices were in the possession of persons who resided in that portion of the Island.’ [My italics]

[6] “Loop and Scroll” seems the most appropriate descriptive term for this feature and is the one I have used previously (e.g. in the report cited below). Apart from being an interesting decoration, it also helps to strengthen a vulnerable area of the neck (rather like a flying buttress), fulfilling a similar role to that of the "highland hump" found on many earlier instruments. This rather elegant solution may have even become an unofficial trademark on harps made by John Kelly.

[7] I previously made this observation in an unpublished report written following an examination of the Mulagh Mast harp at the National Museum of Ireland, titled Harp Photographs March 2007 — A Report by Michael Billinge, subheaded Further Notes on the Mulagh Mast Harp.
‘One design characteristic that distinguishes this harp from the majority of other known specimens is the “loop and scroll” carved into the top of the neck, which almost resembles a handle. Although this is unusual, there are two other datable instruments that exhibit a similar feature. One is ... made by John Kelly in 1734 for Reverend Charles Bunworth.... The other [the Hehir harp] was built in 1726, also by John Kelly.... From a stylistic view, the Mulagh probably dates from a similar period to these ... and it may also have been constructed by John Kelly.’

Michael Billinge
Ireland
Submitted to this site on 28 October, 2011