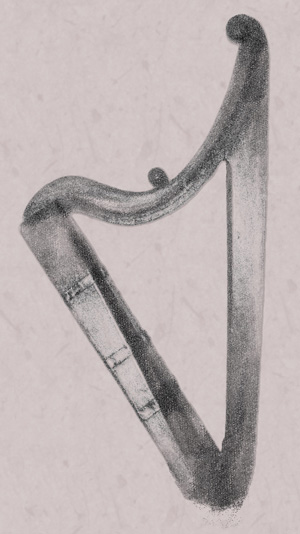 These two harps were formerly in the possession of the late Mr William Kearney a collector and dealer of antiques. Following his death they, along with other items from his collection were sold by Adams, the auctioneers at two sales held in late 1999 and early 2000. They were described respectively as ‘An 18th Century Irish Harp, the case decorated with scrolls, having a large open sound box, 55 inches high’, (Harp number 1 here on this page);[1] A 19th Century Irish Harp, the stained wood case decorated with painted shamrocks, 50 inches high. The purchasers retained anonymity and the current location(s) are unknown.

While the harps were still in Mr Kearney’s possession they were loaned for an exhibition held at Malahide Castle, Dublin. While there they were examined by Nicholas Carolan whose report appeared as ‘Two Irish Harps in Co. Dublin’, published in Ceol; A Journal of Irish Music, volume VII, Numbers 1 & 2, (December 1984). Since this is the only information on these two harps to have been published, with the author’s kind permission the article has been re–printed here under the original title Two Irish Harps in Co. Dublin.