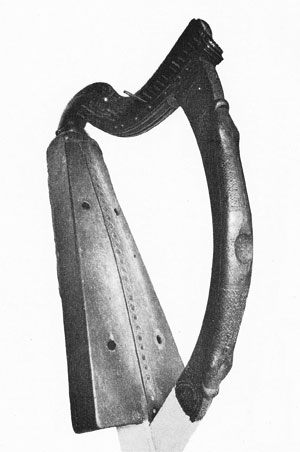 For Robert Bruce Armstrong’s account of this harp see The Irish and Highland Harps pages 55 through 63 These pages contain numerous photographs and drawings, along with detailed descriptions, measurements and observations on this harp.

This ancient harp has accumulated to itself a fascinating history, some of it true and some the stuff legends. Two different opinions on the harp's legendary history were related by the 19th century antiquarians George Petrie and Eugene O’Curry (see The Ancient Music of Ireland by Edward Bunting, p.40 for Petrie, and The Manners and Customs...vol.3 p.268 for O’Curry). Some of their observations and conclusions must be treated with caution, and the entire subject of this harp's history, both ancient and modern, is something this project intends to re–examine and explore further in due course.

Should you choose to read the description of this instrument in Bunting's The Ancient Music of Ireland, with its speculation on its history of the harp, be sure to view the three beautifully detailed line drawings included in the book.

When this harp first came to public notice it was not in a complete state. The lower part of the forepillar and the bottom end of the soundbox had become rotten, and these sections were broken and lost. In the 19th century an attempt was made to both stabilise the remains of the instrument and improve its overall appearance by adding replacement sections in wood and white plaster. But by the 20th century these additions were thought to have been too big; and so in 1961 the harp was rebuilt into the shape that is now seen today. This project was undertaken by the Research Laboratory of the British Museum under the work number 2231. The intention was to have the harp reconstructed to conform to [a] different shape as being more correct by re–making the forepillar to the same contours as the Queen Mary Harp. As such, the absolute accuracy of the current reconstruction has always been open to question, a matter which is explored in greater detail in a paper by Paul Dooley entitled Reconstructing the Medieval Irish Harp published in the Galpin Society Journal Number LXVII, March 2014.