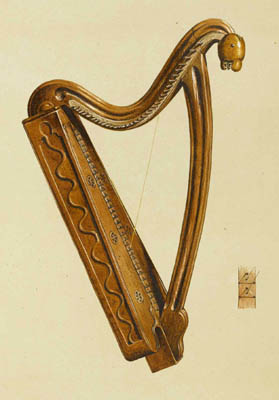 This harp once belonged to the 19th century antiquarian John Bell. For Robert Bruce Armstrong’s account of this instrument, see The Irish and Highland Harps pages 107 through 109.

Robert Bruce Armstrong included this harp in his work on the basis that it had already been illustrated in Drummond’s book.[1] He then goes on to suggest that it was a poorly made reproduction of the Hempson or Downhill harp. While clearly influenced by the Downhill instrument the suggestion that it is just a ‘poor’ reproduction may be a little strong as this harp was clearly a well proportioned instrument in its own right.

Both Drummond and Armstrong provide measurements which on the whole agree with each other although differing slightly in a few areas, differences which can be reconciled if it is assumed that they were measuring from slightly different points on the harp. Based on the fact that it was likely to have been strung during a period when the Irish harp was in use Armstrong goes on to give all 34 string gauges and some string lengths, (except for the gauge of the 14th string which was said to be missing).

Although there is no good reason to doubt Armstrong’s belief that these were the original strings, it should be noted that Drummond’s picture only shows the instrument with one string in place. This may have been deliberately done to avoid either showing the instrument fully strung when it was not, or showing a less artistically satisfying picture with both intact and broken strings in place. So, having just the single string drawn would probably have been simply used as a reference point by the artist for obtaining a perspective.

There is also an early museum photograph which shows the harp displayed along with more of the Bell collection. This picture has a few strings in the treble, one intact and in place the others broken, but there is no sign of any other strings below the seven top pins. However, the picture was taken from the right side and so it is possible that the remains of the other strings consisted of small portions wrapped around the ends of the tuning pins and therefore out of site.[2]

For the background history of this harp, R.B Armstrong drew mainly on the catalogue for an exhibition in Belfast in 1852 where it was listed as ‘the harp of O’Kelly restored’ and the statement in it’s appendix that ‘The Clarshach, or Harp of O’Kelly was presented by Mr Kelly of Barleyfields, near Dundalk, to Mr Peter Collins, a well–known violinist. It fell into the possession of the present owner [John Bell] in 1812’.[3] Armstrong then goes on to some discussion regarding the owner, a Mr John Bell which apart from a suggestion, possibly correct, that the date '1812' is a mistake,[4] can be shown to be otherwise incorrect in a number of details, the date of his death being one of them.

John Bell, (1793–1861), was a Scottish antiquarian living in Ireland. He had been in Dungannon from before 1830 when he married Mary, daughter of Charles McClelland of Loughgal, Co Armagh. He was an early contributor to a number of historical publications. Apart from collecting generally he had taken an interest in the harp and met Patrick Byrne when the blind harper gave a concert in Dungannon in 1849. Bell kept a notebook for his antiquarian notes and scattered through it are a number of references to his attempts to acquire harps, including this one.

‘Joseph Kelly Esq of Barleyfield, near Dundalk gave My Harp to Peter Collins. When a boy he used to ride through the house on the harp with his handkerchief in its mouth, as a horse’.[5]

This statement is a little ambiguous, who was a boy, Peter Collins or Joseph Kelly, but either way suggests that the harp can be dated back to the first decade of the 19th century if not earlier.

After John Bell’s death the whole collection of his antiquities, including the harp came to the Society of Antiquaries of Scotland, of which he had been a Fellow. It was bought with the help of a special Treasury grant in 1867. [6] The society's museum had been undergoing some improvements and the harp was subsequently exhibited in one of the display cases noted as LU2 in the museums 1892 catalogue. The harp was clearly still in the museums collections when noted by Armstrong circa 1904, but sometime prior an inquiry being made to examine it in 1980, it would appear to have been lost. [7]

This Irish Harp, formerly in the collection of the late Mr John Bell, Dungannon, is now in the National Museum of Antiquities, Edinburgh. It measures in extreme length 3 feet 8½ inches, and in extreme width 2 feet 8½ inches. The body of the instrument, or sounding-box, measures 3 feet 2 inches in length, 3½ inches in breadth at the top, and 11 inches in breadth at the bottom, and is 3 inches deep throughout. The upper arm of the harp measures 27½ inches in extreme length, and terminates in front in the head of an animal. The fore–arm, or bow of the harp, measures 3 feet 10½ inches in length. The median line of the sounding-box is pierced for thirty–four strings, and the string–holes have triangular mountings of brass. The upper arm of the harp is strengthened by bars of metal on either side, piereced by holes for thirty–four pins. The sides of the body of the instrument are ornamented by a single wavy line carved in relief, and the six sounding holes are filled with a geometric ornament.

[7] A senior curator at the museum indicated that it was the first time in his experience that anyone had asked to see it and that he had been with the museum for some thirty years during which time it had never been seen. As he had been appointed shortly after the 1939–45 war it is possible that the harp was a casualty of that traumatic period.