The Royal Irish Academy
No. 2 Harp

Once claimed to be the harp of Carolan 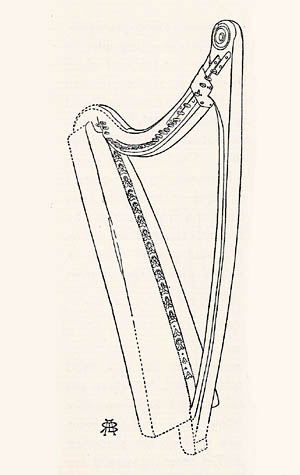 Drawing by Robert Bruce Armstrong,
from The Irish and Highland Harps

Follow this link for a detailed examination of the provenance of his harp.

The Royal Irish Academy’s “No. 2” harp is listed as such in William Wilde’s A Descriptive Catalogue of the Antiquities in the Museum of the Royal Irish Academy, 1857, and is so named because it was the second harp that the Academy acquired. They purchased it for six pounds from a Mr. P. Carlton* who claimed to be a descendant of Turlough O’Carolan and that the instrument had belonged to the famous harper. For this reason the harp is sometimes called the “Carolan harp”. However, this supposed provenance was not given much credence and never promoted by the Academy and was actively scorned and derided by George Petrie who considered Carlton to be a “wretched imposter”.

It has also been suggested that this harp had belonged to Rose Mooney but this too is unlikely. For more information on Mooney’s actual harp and an explanation as to why it is not this instrument see Rose Mooney's Harp.

This harp was formally in the collection of the Royal Irish Academy. Note that the harp has suffered much damage and repair. It is likely that the original string lengths were longer.

For Robert Bruce Armstrong’s account of this harp, see The Irish and Highland Harps pages 83 and 84. This passage includes the drawing reproduced above and some brief description and measurements of the harp.