Return to The Queen Mary page
The Owners of Lude

The main sources of Lude papers are in the collections of the National Archives of Scotland (NAS) and consist of GD 132, the papers of the Robertson Family of Lude, deposited on indefinite loan by Mr W. G. Gordon of Lude and Mr A.R. McInroy, (decendent of the McInroy family who bought Lude in 1821) in 1962. Further material is mixed up in GD 38, the Steuart of Dalguise papers, and probably came from the ‘Charter Chest’ left by James Robertson in his will to John Steuart of Dalguise in 1874. Material relating to when Lude was briefly owned by Campbell of Glenorchy can be found among GD112, the Breadalbane papers, and GD50, the papers of the antiquarian collector John MacGregor. This latter includes a transcript of the Lude Baron Court Book starting in 1622 and a small collection of 8 early Lude Writs, dating between 1598-1619, some of which are now unfit for production and access has been closed.

The National Archives of Scotland also hold the originals of the Crown and State papers in which Lude features, although most of these have been published in edited version. Other collections from families who had contact and dealings with Lude and its owners, for example the neighbouring estate of Urard (formerly part of the Barony of Lude) are also on deposit at the NAS and among the manuscript collections of the National Library of Scotland. [1] There are still some small collections of Lude connected papers in private hands and therefore not always generally available. The largest of these which includes some of the original parts of the Lude Baron Court Book along with many other records of business between neighbouring estates is among the even larger archive of the Atholl Estates at Blair Castle which does make access available through its own archivist. [2]

Although the collections primarily concern legal, financial or similar estate matters, personal papers are also mixed into all these archives. These range from personal correspondence to other such material including verses and memoranda. This includes a small amount of Gaelic verse, although the primary source for that is a small collection of items formerly belonging to General William Robertson of Lude and sent out to him while he was commanding the garrison in Jersey. This is now in the Perth and Kinross County Archive, manuscript 14/80/1, and was published in an edited version in 1997. [3] The copy of the volume of Scots and English verse compiled by Margaret Robertson (Tarlochson), in 1630 is now manuscript MS15937 in the National Library of Scotland, but has been transcribed as part of his thesis by S J Verweij which is available online.[4] 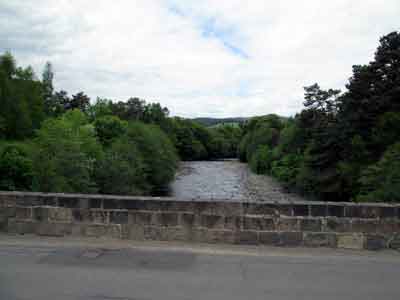 Looking upstream from the Bridge of Tilt. The River Tilt formed the boundary between the Lude estate on the right bank and that of Atholl on the left bank.
Photo ©2013 by www.WireStrungharp.com.
[You may click on the picture to view a larger–sized image]

Lastly, the papers belonging to Colonel James Alexander Robertson which were among the records of the Edinburgh solicitors, Skene, Edwards and Garson, WS. which were deposited at the National Archives of Scotland have only recently been catalogued. They include a list of the Lude Charters and Writs compiled by James Robertson, probably as part of the work for his publication Comitatus de Atholia: the earldom of Atholl, (1860). The list was brought right up to date with his various military ranks until he left the army in 1857. It would seem that at the time of his father, General Robertson's death, James was at school in England where his father had been the area military commander. Shortly afterwards he commenced his own military career with a posting to Australia. Most of these records though relate to James Robertson's personal military career and subsequent retirement when he was at the time commanding a regiment in India. They include his diaries tightly written in a very small hand, very difficult to read and which over his final days lodging at 118 Princes Street in Edinburgh suggest a rather sad end with his main entertainment participating in a chess club.

Return to The Queen Mary page

[1] The Robertson of Fascally Papers, for example.

[2] For example, the lands of ‘little Lude’ to the west of the Fender Burn had actually been part of the Atholl estate from before the start of the sixteenth century, but certainly over the 18th Century was set in Tack to Roberson of Lude.

[3] O’Baoill, Colm and MacAulay, Donald. General Robertson’s Gaelic Manuscript. Aberdeen University Department of Celtic. (1997). It includes a fragment of one song which according to its editors may be addressed to the John Robertson of Lude who was the last to play on the two harps and which seems to include the technical term Port as a reference to his playing.