Back to North’s harp key 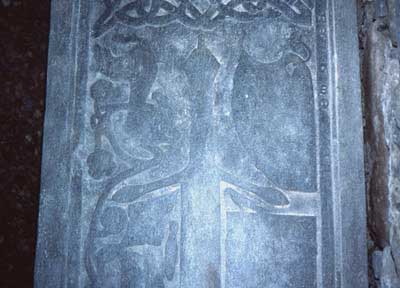 A 15th century grave slab among the collection of carved stones now kept in the re–roofed church at Keills in Knapdale, Argyle, has what had been a very fine carving of a harp. The stone is now greatly worn but in volume 7 of the Royal Commission of the Ancient and Historical Monuments of Scotland Inventory of Argyll, the authors suggest that in addition to the harp the tuning key is also shown.[1] It lies between the top of the harp’s fore–pillar and the pommel of the sword and is more clearly seen in a drawing of the slab published by White in 1875.[2]

According to their endnotes the authors seem to have partly based their suggestion on a comparison with one of the illustrations in Rimmer of a harp shown being tuned in a 12th century Latin Psalter.[3] Certainly that ‘key’ is only being applied to the pin by one end of the short stubby implement, but it probably has more in common with the object held in the hand of the Jerpoint harper than the one on the Keills grave slab.

The key shown on the slab, if that is what it is and allowing for the difficulty of scale and fineness when carving in stone, resembles a socket wrench. Not in fact a bad design for a harp key as the advantage of it effectively being a lever would result in any movement of the other end producing a much smaller but more powerful movement being exerted at the tuning pin. Ideal in fact for making fine tuning movements.

The grave slab currently sits on a tomb–chest in the corner of the church and due to the lay out of the inscriptions it has been suggested that this may have been its original site. The inscriptions have been read as;–

However a more recent re assessment has interpreted the last part to read;– 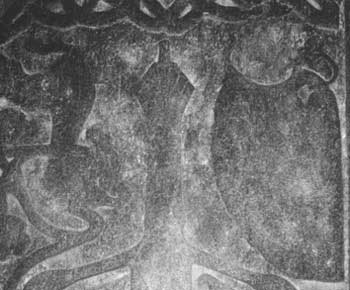 Black and White picture of the grave slab in which the ‘key’ is just still visible.

The inscriptions along with the fact that the carving of the harp shows a decoration having similarities to that on the surviving ‘Queen Mary’[6] has led to speculation on the possible identities of the people commemorated on the slab along with the likelihood of their being members of a local family of harpers. At the date of the grave slab the nearby Castle Sween* was held for the Lords of the Isles by the MacNeills of Gigha who had been appointed the castle’s hereditary keepers. Both the MacNeills and the Castle have strong harp connections; an archaeological excavation at the site of the castle produced a harp pin of a 13th/14th century date along with a coiled copper alloy wire which it was suggested could be music wire.[7]

There were two families of harpers associated with that part of Argyle; the MacIlschenoch’s, (later MacShannons), who were patronized directly by the Lords of the Isles and held lands at the South end of Kintyre,[8] while closer at hand the Mac an Bhreatnaigh, (or Galbraith) family whose branch in that area held lands from the MacNeills on Gigha.[9] Curiously according to a disposition dated 1553 by the Earl of Argyle and his son, the Master of Argyle to a new tenant, the merklands of Ardbeg and ‘Barbay’ which lie about two miles North of Keills had been held by the deceased ‘Mckoshenach, Harper’.[10] 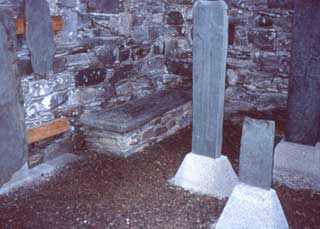 Interior of the restored church looking from the West towards the grave slab which is probably still in its original position in the church although an old photograph from circa 1900 shows it flat on the ground and not raised up into a form of table tomb. 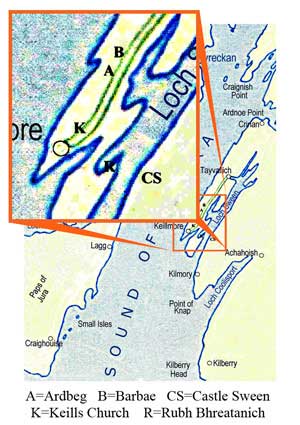 The document involved is in a rather poor condition and the harper’s first name has been lost but it is unlikely that the harper concerned had any family connection with the grave slab at Keills as the forename of Alan has no precedents in the McIlschenoch genealogy. It does though raise the possibility that those two merklands may have traditionally been held by a local harper and that he may have been one of the Mac an Bhreatnaigh family. 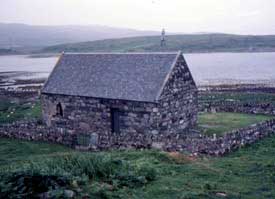 Keills from the North–West looking South–East across Loch na Cille towards the island of Danna and beyond that Clach–dhruim Mor and Cnoc Stighseir, the two peaks on the hill ridge above Castle Sween.

It is for example possibly more than coincidence that the most direct route between those merklands, (or the church at Keills for that matter), and Castle Sween would be to head to Rubha Bhreatanich at the North end of Danna and directly opposite the castle then a short boat trip across Loch Sween. Any other route would be considerably longer or require a far more exposed boat journey around the South end of Danna. Turning to that forename of Alan, while it cannot definitely be shown to have been used by the Mac an Bhreatnaigh family there is a possible link. 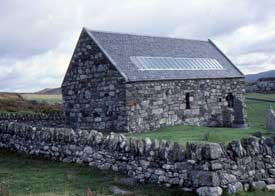 Keills from the South looking North towards Ardbeg and Barbae.

Another, probably more senior branch of the family were for several generations harpers to the Royal Court under James IV and they were awarded lands near Wigtown in Galloway. In common with much of Scottish life after the disaster at Flodden in 1513 that patronage ended, possibly along with the incumbent harpers life, he too having died with his king as no more is heard of him; but shortly after that in 1515/16 an ‘Alan McClairsche’ appears as one of the bailies of Wigtown.[11] As the Mac an Bhreatnaigh family would have been the principle family of harpers based there then a connection with Alan ‘son of the Clarsair’ seems likely and suggests the use of Alan as a forename by that branch of the family.

For a complete slide–show of the images included on this page, please click on one of the thumbnails below:

* Please follow this link to an article (in pdf form) regarding the excavation at Castle Sween in the Proceedings of the Royal Society of Antiquaries of Scotland with the details of the find of a harp pin and possible harp wire there. Please note this link will take you to the website of the Archaeology Data Service of the University of York.

[1] Argyll, An Inventory of the Monuments. Volume 7, Mid Argyll & Cowal, Medieval & Later Monuments. The Royal Commission on the Ancient and Historical Monuments of Scotland. (1992). 90–91.

[4] Steer, K A and Bannerman, JWM, Late Medieval Monumental Sculpture in the West Highlands, Royal Commission on the Ancient and Historical Monuments of Scotland, (1977). 146.

[6] The harmonic curve of the harp is somewhat foreshortened and a case has been made that the harp had deliberately been carved at an angle designed to provide the widest possible view of the soundbox to enable the design to be shown.