Back to McIntyre North Page 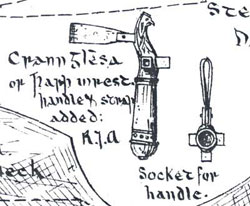 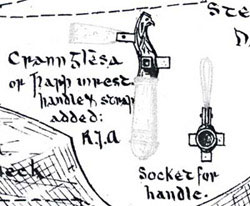 The “Key” with the handle and strap faded out to indicate the probable actual form of the artifact.
Please click on image to see larger version
Both images above were digitised by WireStrungharp.com

On page 39 of The Book of the Club of True Highlanders, McIntyre North makes reference to an artifact that he believed might have been a harp tuning key:

Plate 20 shows an ancient bronze wrest, “crann glesa,” or tuning hammer. It has three square sockets to receive the heads of the pins; the projection at the rear held the strap for hanging to the girdle; and a small handle, fitted in and riveted to the large socket, gave the necessary leverage for tuning.

This enlarged picture of what McIntyre North suggests was a wrest or tuning key was among the artefacts held by the Royal Irish Academy at the time he visited. It does not seem to be listed in the catalogues of the RIA museum compiled by Sir W. R. Wilde between 1857 to 1863, so presumably had been acquired between then and the date of McIntyre North’s visit to the museum sometime prior to his publication of 1880.

The suggestion by the RIA museum that it was the top of a ‘chieftain’s banner’ seems even less likely than that it may have been a tuning key, however a modern re–assessment is hampered by it’s current whereabouts being unknown. Most of the former contents of the RIA museum eventually passed to what is now the National Museum of Ireland and attempts are being made to try and track it down.

If it can be found and identified as a ‘tuning key’ it would be the first physical example we have. A number of suggested ‘tuning keys’ have been identified including an artefact shown in a list of archaeological acquisitions for the National Museum of Ireland for the year 1963. Described as a ‘Harp–key’ admittedly with the addition of a question mark in brackets, it is very unlikely and seems in fact to be some sort of awl. Then in terms of pictorial evidence an item held in the hand of the reclining figure with a harp on a grave at Jerpoint Abbey has a greater possibility of being a tuning key; and probably the most likely, the item resembling a socket spanner beside the harp shown on a medieval grave slab in the old church at Keills in Argyle.

Unless the item referred to by McIntyre North can be found and re–examined its identification must remain speculative. However, since he actually had the opportunity to physically examine it and presumably was able to identify how it would have fitted onto the ends of the tuning pins, it is possible for now to give him the benefit of the doubt.