Addition Note (z) page 9 regarding harps and Harpers in the 1819 Edition. 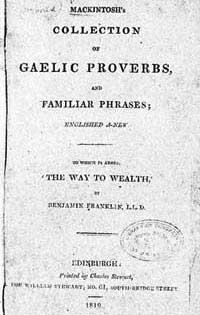 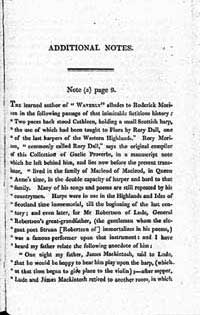 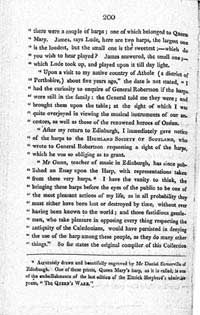 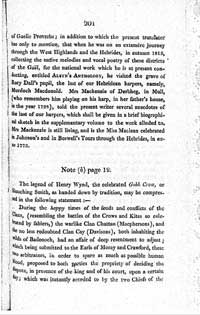 Donald MacIntosh was born in October 1743 at Orchelmore, a part of the Urard Estate where his father James had a holding. The estate is adjacent to Lude and this note which appears in the 1819 edition of the Gaelic Proverbs relates the story of James MacIntosh hearing John Robertson of Lude (died 1730/1), play the harp. The Collection of Gaelic proverbs was originally published by Donald MacIntosh in 1785 and this ‘second edition’ of 1819 which was edited by Alexander Campbell, included what the editor described as a ‘manuscript note’ which he [MacIntosh] left behind him. The ‘note’ can be fairly closely dated since it refers to John Gunn’s Treatise on the harps as having been published, so must post date July/August 1807[1] and must have been written before Donald’s death in November 1808.[2]

From this late date and the wording of the manuscript note, it does not appear to have been just a personal memorandum by MacIntosh, but his desire to place on record that he was the person responsible for bringing the harps to the attention of the Highland Society of Scotland, for whom he had worked as their keeper of Gaelic manuscripts since 1801. Unfortunately as printed, the note has clearly been edited and this has introduced some ambiguity. For example it is not clear if the statement that ‘one of which belonged to Queen Mary’, referring to the two harps was part of the conversation between James MacIntosh and Lude or, following the publication of Gunn’s Treatise, a clarification added by either by Donald MacIntosh or his editor Alexander Campbell.[3]

The editor has also added his own contributions at the end of the ‘Additional Note’ with some references to the harper Murdoch MacDonald but these too raise problems. Colm O’Baoill has pointed out that Campbell’s statement that ‘Mrs Mackenzie remembered the harper playing in her fathers house in 1738’ must be incorrect since the lady concerned was not born until 1740/41.[4] While the editor's statement that ‘he visited the grave of Murdoch MacDonald’ seems fairly solid, but the record of the event in his diary kept during his Hebridean journey[5] is worded in a much less emphatic manner. There he states that on the 23 August ‘On my way from Treishnish to Sunipole it was pointed out to me the spot where the remains of Murdoch MacDonald the last of our Hebridean Harpers were laid’.

The route taken by Alexander Campbell would have passed four old burial grounds, although not that at Kilmore some miles further east of his destination and which was part MacLean of Coll’s estate at Quinish which is where Murdoch MacDonald was said to have spent his latter days. However, the harper was thought to have been a Coll man and may have been buried on his home island. Since the route from Treishnish to Sunipole mostly runs in an elevated position close to the coast; especially at Sunipole, from which at many points it is possible to look over to the Isle of Coll and ‘point out the spot where he was laid’. Thus it appears that once more Campbell has shown a lack of clarity.

Images from MacKintosh’s Collection of Gaelic Proverbs and Familiar Phrases linked from this page have been reproduced through the courtesy of the Library of Congress in Washington, D.C.

You may follow this link to the National Library of Scotland’s digitized copy of Mackintosh’s Gaelic Proverbs in their digitized collection of Early Gaelic books, where the text can be searched or downloaded. (Scroll down their page and look to the lower–left side of the screen).

[1] At the Highland Society of Scotland meeting of 19 June 1807 the secretary announced the publication of ‘Mr Gunn’s Treatise on Harps and Ancient Music.(Ingliston Papers, Sederant Book 4, page 274). On the 15th and 27th of June the Edinburgh Evening Courant carried adverts for the about to be published ‘Treatise’ while an advert carried in the paper for the 27 August 1807 referred to it as ‘Published’.

[3] Campbell’s whole approach to re–editing the original proverbs almost suggests the maxim ‘change for changes sake’. For an example relevant to harps with the proverb at page 25 of the 1785 original edition compare;— ‘Cadal a chlarsair seachd raighin gun fhaireach’ which MacIntosh translates as ‘The sleep of the harper, a year and threequarters without wakening’, to the version on page 62 of Campbell’s 1819 edition. Apart from an obvious typesetting error of ‘Codal’ rather than ‘Cadal’, the Gaelic version is the same but his translation reads ‘The harpers sleep–seven quarters of a year without interruption’. The ‘quarters’ referred to are clearly the four old Scottish legal ‘term or quarterdays’ of Candlemas, Whitsunday, Lammas and Martinmas, however to this writer ‘a year and threequarters’ makes more sense in what is a translation.

[5] Alexander Campbell: A slight sketch of a journey made through parts of the highlands and hebrides; undertaken to collect materials for Albyns Anthology (1815). Edinburgh University Library Special Collections MS LaIII:577.