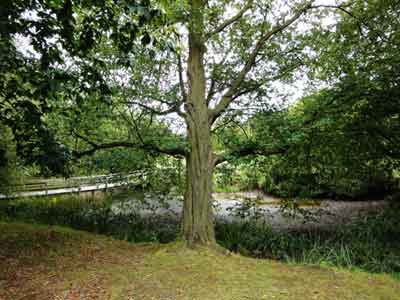 Please Note: since this page was written a re-examination of the two harps discussed below has identified the sound-boxes as willow.

In 1969 the two harps known as the ‘Queen Mary and Lamont’ belonging to the National Museum of Antiquities of Scotland were examined by A. J. Hayes of the University of Edinburgh Department of Forestry and Natural Resources in an attempt to identify the nature of the woods used in their construction. Having initially expressed his first impression that it was a Rosaceous timber he then after microscopic examination stated that he was 99% certain that the timber used was hornbeam, (Carpinus betulas) and that the wood used in the sound boxes, forepillar and harmonic curve were identical in both cases. 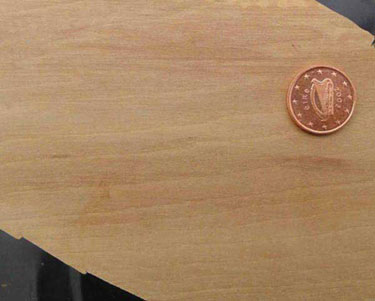 Hornbeam does not have a distinctive grain pattern, and is often less apparent than on the piece in this photograph. This piece, planed but not polished, is also slightly spelted, or dozed, as it had been down for some months. [Please note: The Irish penny is 16mm in diameter.] Photograph by Michael Billinge

If this identification should stand the test of time it raises some interesting questions, not least because the natural distribution of the tree was limited to the south east of England, This had led to suggestions that it was not indigenous to Britain but this idea is in decline since its pollen has been found in very early test core samples, (It has been suggested that Hornbeam was deliberately planted in Ireland shortly before 1700, (Forbes, 1932/4). 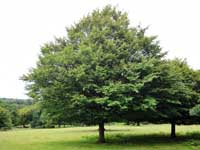 Young Hornbeam in a park, as will grow in open with no competing vegetation. Photograph by Michael Billinge

Trade in wood occurred from early times, especially in Scotland where even woods native to the country were imported being an easier option when the difficulty of access meant that extraction of timber from the natural forest was a problem. In this case, if it is hornbeam then a trade route established in Viking times may be the answer, with the wood coming from southern Denmark or southern Sweden where hornbeam was a native species and travelling via the Northern Isles, (Orkney, Shetland and adjacent mainland, always fairly treeless and so major importers of wood of all kinds), and then round into the lands of the Lordship of the Isles. 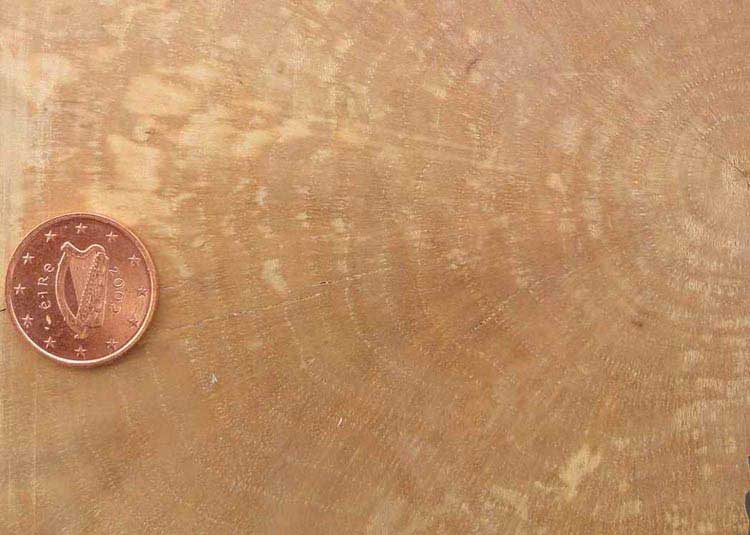 A photograph of the end grain picture of the same piece of Hornbeam wood, to show the typical growth rate of less than 5mm annually.
[Please note, the Irish penny is 16mm in diameter.]Photograph by Michael Billinge

What is far more puzzling than how the wood was obtained was the choice of wood in the first place. Hornbeam matures naturally in around a 100—140 years and un-pollarded reaching a height of between 50 to 80 feet with a girth of between 6 to 10 feet with exceptionally fine trees reaching 90 to 100 feet and a circumference of 10–12 feet. The trunk is very irregular making it ‘practically impossible to obtain, even from a fully grown tree a piece of timber sufficiently large and straight enough to be used in any kind of constructional work; while the same habitual distortion of the stem renders its wood ‘cross-grained’ and, therefore, difficult for the joiner or cabinet-maker to work’. ‘Yet another blemish arises from the fact that, as the tree approaches maturity, its wood shows a tendency to develop ‘shakes’. Further the wood shrinks greatly in the course of drying’. When dry it is exceedingly hard, tough, close-grained and white and when thoroughly dry acquires the texture of horn or even bone or ivory but notably lacking in flexibility’, (Miller Christy, 1924). 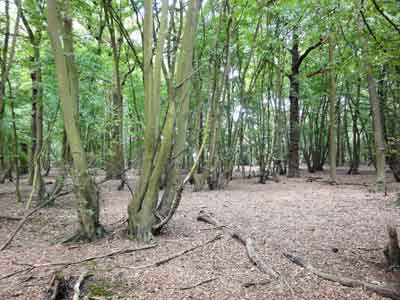 Hornbeam coppice - hornbeam was coppiced (often for fuel), and small coppice woodlands of hornbeam can still be met with in southern England. Photograph by Michael Billinge

A rather curious choice of wood for making harps, though, despite the rather blanket statements made by the work just quoted, one of the authors has worked with it for that purpose and it would have been possible to find hornbeam suitable in size for making a harp soundbox. The wood was found to be hard and very slow and tough to work although it cuts cleanly with a sharp edged tool. The timber's strength and stiffness, combined with its hard wearing properties made it an excellent choice for moving parts like wooden gear wheels for water or windmills. Hornbeam in fact seems to have almost the opposite properties to willow. It is hard and heavy not soft and light, and is about the stiffest of timbers whereas willow is the most flexible. Probably because of this stiffness when hornbeam does split it splits along, whereas willow almost has to be torn apart. 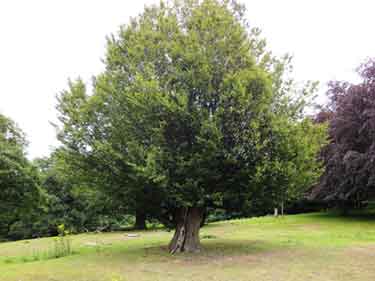 This ancient tree had been pollarded a very long time ago and like many pollarded trees, though the centre of the trunk rots away, the tree itself can live on for a great many years (pollarded trees can live longer than those left alone). Photograph by Michael Billinge 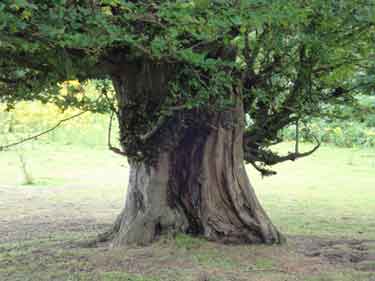 The same tree, viewed from the other side. (A venerable tree but not perhaps what you would make a harp out of.)Photograph by Michael Billinge

Submitted by Michael Billinge and Keith Sanger, 5 May, 2011. Updated with new photographs on 11 August, 2011