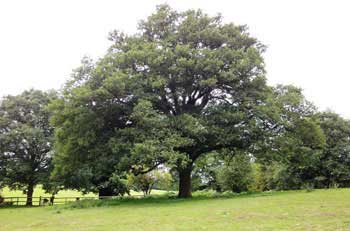 An oak tree as it appears growing in open space, or parkland.
Photograph by Michael Billinge

Used for the back of at least one of the old harps and also claimed by Talbot (Rimmer, 1963) to have been used for making the fore pillars and harmonic curve, although none of the surviving instruments support this statement. Two varieties of oak were native to the British Isles, Pedunculate oak, (Q. robur) and Sessile oak, (Q. petrae), with the former being the dominant species in the south and east while the latter is more dominant in the north and west. Classed among the ‘nobles of the wood’ in the Old Irish Tree list it’s acorns were used as the staple diet for pigs during the autumn and the bark was used for tanning leather. The Gaelic name ‘Daur’ has given rise to numerous place–names, Derry in Ulster perhaps being the most famous.

An oak tree as it grows in woodland. Note that it is much taller with longer, straighter trunk.
Photograph by Michael Billinge

Oak trees are large and depending on position and climate can grow up to 120 feet in height and over 9 feet in diameter, although as they live up to 300 years of age some hollowing out of the trunk can occur in mature trees. However, by 1600 it has been estimated that no more than 3% of the total land area of Ireland was still wooded and a recent study, albeit in just one part of the country, suggests that nearly all of the modern Sessile oak woods result from post 1790 plantings, (O’Sullivan and Kelly, 2006, 355). The general shortage of timber in Ireland led to the frequent use of ‘bog wood’, (Lucas, 1954, 71–134).

This combined picture shows both quarter sawn (the larger piece) and plain/flat sawn (at the bottom). Both pieces planed smooth but not polished. [The Irish penny is 16mm in diameter.]
Photograph by Michael Billinge

The suggestion that bog oak was used for harp making seems to have first arisen with an article and picture of a harp published in the ‘Connoisseur’ in 1907. The article was noticed by R. B. Armstrong and in his own manuscript notes he was quite sceptical noting that ‘The harp is comparatively modern...It is not likely to be of bog oak or to have been found in a bog unless placed there intentionally’.

All ‘bog wood’ was formed by a process where in the distant past rising peat levels killed the existing trees. The dead wood was then preserved by the peat, but in most cases this only involved the root and lowest part of the trunk. If the remaining exposed part of the dead tree was blown over into the bog before otherwise just rotting away then whole trunks might occur, but clearly this is more likely to occur with the more ‘rot–resistant’ trees like oak, (Irons, 1987, 55; — Rackham, 2006. 89).

Large pieces of Bog wood had a tendency to split on drying with traditional seasoning methods so tended to be used for smaller items. In the early 19th century bog oak carving became popular but had to be undertaken while still wet and before petrification got underway when the wood changed from a mid to dark brown into an ebony colour. Once fully petrified it became deep black and extremely hard to the extent that Irish bog oak carvings have been mistaken for ‘jet’. As described it does not seem to be the most suitable material for making any part of a harp. although it is possible that the description ‘bog oak’ was generic covering a range of stages in the process of a fallen oak becoming carbonised. However, none of the existing known historical harps, or parts of surviving instruments appear to be identifiable as being made of ‘bog oak’.

Submitted by Michael Billinge and Keith Sanger, 5 May, 2011. Updated with new photographs on 9 August, 2011