Used for the Carolan Harp, (Rimmer, 1969; 75), this tree was not native to the British Isles having been introduced sometime around the 13th century and its first recorded appearance in Ireland dating to 1632. The sycamore, or more correctly the European Maple, proved able to withstand the climate and became so popular for use in shelter belts that by the 18th century its timber was commonly available for sale. Sycamore is one of the main woods used in stringed instrument making but the trees in Ireland and England generally grow too fast to be first choice for high quality violin making compared to the slow growing trees from the Alpine or Baltic regions. 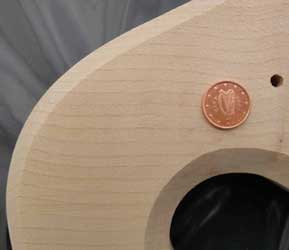 This beautiful piece of sycamore demonstrates the typical pattern of sycamore(which is similar to maple) when it is cut on the quarter. [The Irish penny is 16mm in diameter.]
Photograph by Michael Billinge 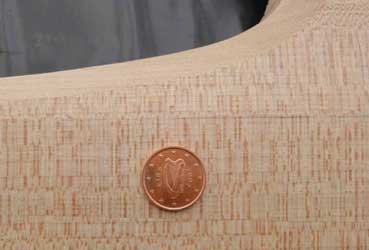 This photograph also shows the wood quarter sawn, but here it is cut exactly perpendicular to the annual rings revealing this striking effect.
Photograph by Michael Billinge

Sycamore plain/flat sawn, planed but not polished. [Please note, the Irish penny is 16mm in diameter.]
Photograph by Michael Billinge