According to a manuscript on musical instruments written sometime between 1685 to 1701 by James Talbot, Professor of Hebrew at Trinity College, Cambridge, when describing two Irish harps he states that in both cases the Body was of Willow, while the rest was made of Oak. He then goes on to make the additional statement that ‘in England Body Bow and Head Wallnut’, both implying that Irish Harps were being made in England and that Walnut was one of the woods used in their construction. (Rimmer; 1963). No surviving harps have yet been shown to have used walnut in their construction nor, so far, apart from Talbot's statement, is there any evidence of Irish harps being made in England.

A section of Walnut, plain sawn, planed but not polished. [Please note, the Irish penny is 16mm in diameter.]
Photograph by Michael Billinge

Walnut was not a native species in Britain although the nuts had been imported from as far back as Roman times when they came from Gaul and Italy. The name ‘wal’ or ‘walsh nutte’ is Anglo Saxon for ‘Foreign nut’ to distinguish it from the native hazel nut. The fact that the name appears in Anglo Saxon Glossaries dating from the 11th century and there are accounts through the thirteenth and fourteenth centuries referring to ‘great nuts’ and ‘walnuttes’ presents a problem in identifying whether just the nut or tree was meant, but the tree was certainly established in southern Britain by the sixteenth century being grown mainly for its fruit. 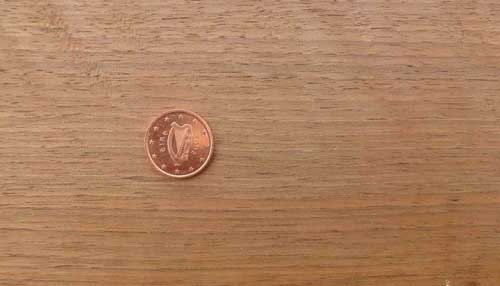 A section of Walnut, quarter sawn, planed but not polished. [The Irish penny is 16mm in diameter.]
Photograph by Michael Billinge

Subsequently towards the end of the seventeenth century, concurrent with the time of Talbot’s manuscript, walnut started to replace oak in the making of furniture and for a while was so popular that 'English' walnut was exported throughout the expanding British Empire, albeit that most of the timber for the production was still imported from the trees native Mediterranean homelands. In time walnut gave way to mahogany for furniture making but the trees continued to be grown as the Napoleonic Wars demonstrated its suitability for gun and pistol stocks. It is worth remembering that if as suggested walnut was used for making any of the old harps, it would have been this European species, Juglans regia and not the American or black walnut, Juglans nigra which is now to be found in the southern parts of Britain and has been used for modern harp making.